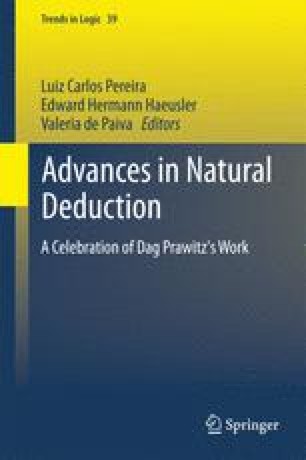 In this chapter bi-intuitionism is interpreted as an intensional logic which is about the justification conditions of assertions and hypotheses, extending C. Dalla Pozza and C. Garola’s pragmatic interpretation [18] of intuitionism, seen as a logic of assertions according to a suggestion by M. Dummett. Revising our previous work on this matter [5], we consider two additional illocutionary forces, \((i)\) conjecturing, seen as making the hypothesis that a proposition is epistemically necessary, and \((ii)\) expecting, regarded as asserting that a propostion is epistemically possible; we show that a logic of expectations justifies the double negation law. We formalize our logic in a calculus of sequents and study bimodal Kripke semantics of bi-intuitionism based on translations in S4. We look at rough set semantics following P. Pagliani’s analysis of “intrinsic co-Heyting boundaries” [40] (after Lawvere). A Natural Deduction system for co-intuitionistic logic is given where proofs are represented as upside down Prawitz trees. We give a computational interpretation of co-intuitionism, based on T. Crolard’s notion of coroutine [16] as the programming construction corresponding to subtraction introduction. Our typed calculus of co-routines is dual to the simply typed lambda calculus and shows features of concurrent and distributed computations.

Classical Logic Intuitionistic Logic Natural Deduction Sequent Calculus Epistemic Possibility
These keywords were added by machine and not by the authors. This process is experimental and the keywords may be updated as the learning algorithm improves.
This is a preview of subscription content, log in to check access.

The main stream of bi-intuitionistic logic follows the tradition of Cecylia Rauszer, who created the theory of bi-Heyting algebras [50, 51], and defined its Kripke semantics, later studied with categorical methods by Lawvere [32], Makkai, Reyes and Zolfaghari [33, 52]; more recently, proof theoretic treatments of subtractive or bi-intuitionistic logic have been given by Rajeev Gore [25], Tristan Crolard [14, 15] and others.

In Rauszer’s possible-world semantics the forcing conditions for implication refer to up-sets of possible worlds with respect to the accessibility relation, while the forcing conditions for subtraction refer to down-sets. Namely, \((A\supset B)^M\) = \(\Box (A^M\rightarrow B^M)\) is true in a world \(w\) if for all \(w'\) such that \(wRw'\) \(A^M\rightarrow B^M\) is true in \(w'\); on the other hand, \((C\backslash D)^M\) = Open image in new window

We see at once that Rauzer’s bi-intuitionistic logic is as inadequate for a representation of assertions and hypotheses as PBL: letting Open image in new window

, it is consistent to assert \(p\) (with respect to “the future”) and also to conjecture \(\lnot p\) (in the past). Although the issue is beyond the range of the present chapter, it may be interesting to catch a glimpse of what polarized Rauszer’s logic looks like in our framework.

Is there a pragmatic interpretation of dual intuitionistic logic which retains such a temporal element and is thus closer to Rauszer’s tradition? The question does make sense. Clearly, the justification conditions for assertions and conjectures concerning the future and the past are different in several important ways: for instance, direct observations of some future events will be possible, but never of past events. Thus it would be plausible to introduce tense-sensitive illocutionary operators, giving assertive force to statements about the future ( Open image in new window

) and about the past ( Open image in new window

) and, similarly, conjectural force to statements about the future ( Open image in new window

) and about the past ( Open image in new window

This would lead to the development of a tense-sensitive polarized bi-intuitionistic logic (\(\mathbf {PBL}_t\)). The “semantic reflection” of \(\mathcal {L}^{PB}_t\) is in temporal S4, where formulas of Open image in new window

Given a bimodal frame \(\mathcal {F}\), the following are equivalent:
Open image in new window

Therefore the following are equivalent:

We leave the task of finding a suitable formalization of \(\mathbf {PBL}_t\) as an open problem.

In this section we consider an example of computation that is dual to a familiar reduction sequence for Church’s numerals.

As trees in Prawitz style Natural Deduction \(\mathbf {NJ}^{\supset }\) can be decorated with \(\lambda \) terms, so we can assign terms of our dual calculus to Prawitz trees of subformulas for \(\mathbf {co-NJ}^{\backslash }\) derivations. For convenience, we still draw trees with the root at the bottom, keeping in mind that here derivations are built from bottom up. We shall use Biasi’s notation \((t\rightarrow \mathtt {a})\) for \(\mathtt {mkc}(t,a)\) and Open image in new window