Perspectives on Theory of Controversies and the Ethics of Communication 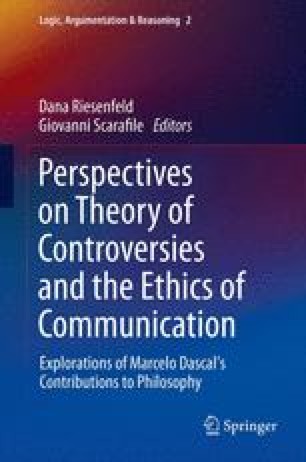 Locke and Leibniz on the Balance of Reasons

One of the features of John Locke’s moral philosophy is the idea that morality is based on our beliefs concerning the future good. In An Essay Concerning Human Understanding II, xxi, §70, Locke argues that we have to decide between the probability of afterlife and our present temptations. In itself, this kind of decision model is not rare in Early Modern philosophy. Blaise Pascal’s Wager is a famous example of a similar idea of balancing between available options which Marcelo Dascal has discussed in his important 2005 article “The Balance of Reason”.

Leibniz, however, was not always satisfied with this kind of simple balancing. In his commentary to Locke’s Essay, Nouveaux essais sur l’entendement humain, II, xxi, §66, he presented an alternative model which is based on an idea of plural, mutually conflicting inclinations. This kind of model, called as vectorial theory of rational decision by Simo Knuuttila, fits well with Leibniz’s theory of the soul where volitions are formed as a kind of compromise between different inclinations to different goods.

I will present these two models and show how they illustrate the practical rationality of Locke and Leibniz and how their moral philosophies differ, although being similar in certain respects. The topics include Leibniz’s criticism of Lockean hedonism and the discussion of akratic behaviour in II, xxi of Essay and Nouveaux essais.

I would like to thank Professor Marcelo Dascal for inviting me to work in the Leibniz-Locke project at the University of Tel Aviv in September-October 2009 and the Academy of Finland and the University of Tel Aviv whose grants made the visit possible. The research done during the period forms the core of this paper. Thanks are also due to the scholars present in the Nordic Workshop of Early Modern Philosophy (Uppsala, Sweden, 2010) who commented on an earlier version of this chapter.

Cite this chapter as:
Roinila M. (2014) Locke and Leibniz on the Balance of Reasons. In: Riesenfeld D., Scarafile G. (eds) Perspectives on Theory of Controversies and the Ethics of Communication. Logic, Argumentation & Reasoning (Interdisciplinary Perspectives from the Humanities and Social Sciences), vol 2. Springer, Dordrecht