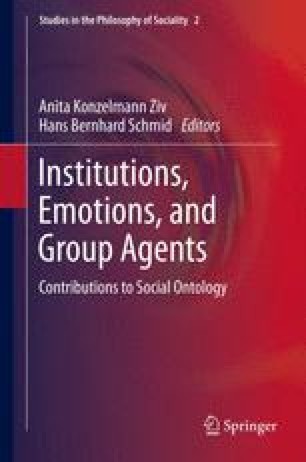 Can Groups Be Autonomous Rational Agents? A Challenge to the List-Pettit Theory

Chapter
Part of the Studies in the Philosophy of Sociality book series (SIPS, volume 2)

Christian List and Philip Pettit argue that some groups qualify as rational agents over and above their members. Examples include churches, commercial corporations, and political parties. According to the theory developed by List and Pettit, these groups qualify as agents because they have beliefs and desires and the capacity to process them and to act on their basis. Moreover, the alleged group agents are said to be rational to a high degree and even to be fit to be held morally responsible. And the group agents under consideration are autonomous, according to the List-Pettit Theory, because their beliefs and desires cannot easily be reduced to the beliefs and desires of the groups’ members. I want to show that we should not accept the List-Pettit Theory, because it implies the absurd claim that instrument-user-units, like car-driver-units, are rational agents over and above their user-parts, say drivers. The focus of my argument is on whether instrument-user-units are autonomous in relation to their user-parts on the List-Pettit Theory.