Human Happiness and the Pursuit of Maximization 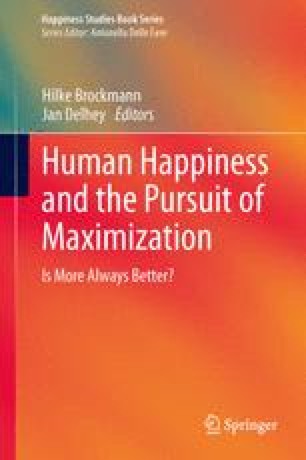 When having to decide what action to take, most people want to achieve the best outcome possible. A merely good outcome seems to be less attractive, let alone a bad outcome. But what is ‘the best’? Obviously it is something that has to be characterised qualitatively: in terms of pleasure or altruism, for example. But in order to be ‘the best’ it is seemingly not sufficient to do what is pleasurable or altruistic if we are in a position to do something which is more pleasurable or more altruistic. This introduces a quantitative dimension. More of something good is better than less of it. Money is a fine example, but not the only one. If one has the choice, it would be preposterous to prefer poorer to better health, less beauty to more, a shorter life to a longer one, less justice to more. What could be wrong with that? Nevertheless, it will be argued in this chapter that a general tendency to maximising the outcomes of one’s actions is not conducive to one’s happiness and, therefore, not rational. Furthermore, some of the reasons why this is the case will be considered.

Maximisation Principle Sale Price Decisional Situation Practical Rationality Potential Buyer
These keywords were added by machine and not by the authors. This process is experimental and the keywords may be updated as the learning algorithm improves.
This is a preview of subscription content, log in to check access.

I would like to thank the “Hanse Wissenschaftskolleg” in Delmenhorst for providing me with a fellowship in 2009/10 on which I began the work on the problems of maximisation. I continued this research as part of my ongoing project at the “Center for Advanced Study in Bioethics” at the University of Münster. I am grateful to my colleagues at this centre as well as Nikola Kompa (Osnabrück) and Aloys Prinz (Münster), for helpful comments on earlier versions of the present paper. The German text was translated into English by Sarah L. Kirkby.