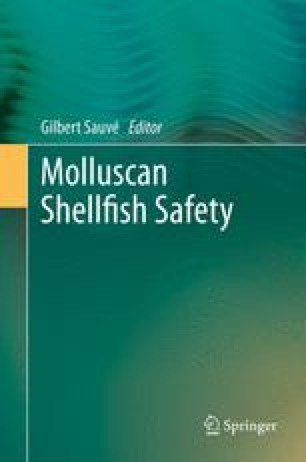 Algal biotoxins were determined on a weekly basis through the summers of 2009 and 2010 on mussel (Mytilus edulis) samples taken from three sites in Killary Harbour, a fjord located on the west coast of Ireland. Chemical (LC-MS), immunoassay (ELISA) and enzymatic (Protein Phosphatase, PP2A) methods were used to analyse algal diarrhetic shellfish poisoning (DSP) toxins in methanol extracts from these samples. Results were compared to test the applicability of the non-chemical methods as alternative rapid testing techniques, which were applied on both hydrolysed and non-hydrolysed samples. Results were also compared with mouse bioassay data from the Irish national monitoring programme. Results from 2009 showed a significant DSP event in July, with toxin concentrations reaching 1.2–1.4 μg (g whole flesh)−1. All methods were capable of detecting this event, which lasted for 3–4 weeks during which harvesting was closed, caused by an influx of a Dinophysis spp. population into the fjord. Examination of integrated (0–10 m) water samples showed Dinophysis cell counts as high as 2,400 cells · l−1. These Dinophysis and toxin levels were never reached during the summer of 2010, when LC-MS results showed that DSP toxin levels rose above the EU maximum permissible level of 0.16 μg g−1 in only one sample, co-inciding with Dinophysis cell counts of 300 cells · l−1. Results using immunoassay on non-hydrolysed samples were broadly similar to the LC-MS data, while the results for the hydrolysed samples were found to be highly variable and often significantly elevated compared with the non-hydrolysed sample LC-MS results. This variability was significantly reduced using the phosphatase assay, which gave results more compatible with the LC-MS data set. The applicability of using non-chemical methods, particularly in geographically remote areas as methods for screening shellfish quality, is discussed.

Okadaic Acid Hydrolyse Sample Diarrhetic Shellfish Poisoning Outer Site Middle Site
These keywords were added by machine and not by the authors. This process is experimental and the keywords may be updated as the learning algorithm improves.
This is a preview of subscription content, log in to check access.

The authors acknowledge the assistance of Simon Kennedy (Killary Fjord Shellfish), H. Kleivdal (Biosense Ltd.) and Sarah Cosgrove, Gary McCoy, Evelyn Keady and Nicolas Touzet. This work could not have been possible without access to the data obtained during the national biotoxin monitoring programme, carried out by the Marine Institute, for which the authors are very grateful. This work is a contribution to the project WATER and was part-funded through the INTERREG IVB Northern Periphery Programme.