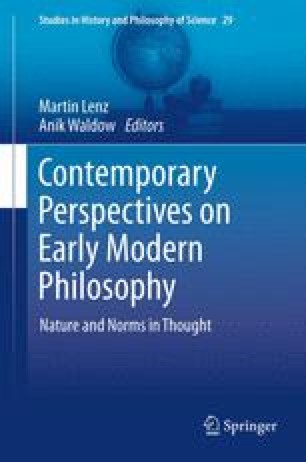 Three Problems in Locke’s Ontology of Substance and Mode

Chapter
Part of the Studies in History and Philosophy of Science book series (AUST, volume 29)

Locke holds that we have two radically different types of ideas. Ideas of substances like a horse, a pig, and the metal gold are designed to correspond to things in the world that exist and have their properties independently of our ideas. Mode ideas have the opposite direction of fit. They are not meant to capture independently existing archetypes but rather function as categories that we impose on the world. Examples of mode ideas are the idea of a rainbow, a tune, a duel, and etching. But this category is important for Locke because it includes the key ideas of mathematics and morality. Thus, Locke’s distinction between two types of ideas corresponds to a distinction between bodies of knowledge that derive norms from observation (the various sorts of natural philosophy) and those intended to prescribe norms (mathematics and ethics). But although this way of thinking is fundamental to Locke’s moral epistemology, I argue that he has some difficulty accommodating the substance-mode ontology with his other metaphysical and semantic commitments.

Mixed Mode Natural Kind Mode Direction Dependence Relation Complex Idea
These keywords were added by machine and not by the authors. This process is experimental and the keywords may be updated as the learning algorithm improves.
This is a preview of subscription content, log in to check access.