The Threads of Natural Law 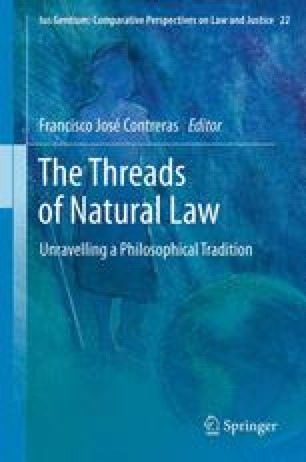 Dworkin and the Natural Law Tradition

Ronald Dworkin, following a holistic conception of thought, claims the law to be “a branch of political morality”. Taking this as a starting point, I explore two implications he derives thereof. The first one is that in the analysis of the concept of law, moral considerations are necessarily involved; the second implication is that human rights are part of the content of morality. Particularly, Dworkin maintains that, whenever we ask what law demands, forbids or allows in any specific legal system, morality is decisively relevant. Morality is so decisive when identifying law that the difference among confronting theories in this respect does not lie in the fact that some include morality and others exclude it, but in the different level of analysis in which morality is introduced by each of them. Dworkin, in turn, provides us with a characterisation of human rights as a particular kind of political rights, the latter being generally conceived by him as trumps. Hence, opposed to a set of legal rights and having their groundings in an attitude of respect towards human beings as beings entitled to dignity.

My hypothesis is that, even if the former theses do not commit him to any version of iusnaturalism whatsoever, he rescues some premises generally linked to the Natural Law tradition that allow him to organize the academic debate on the relationship between law and morality in a much more enlightening and rigorous way. Doing so, Dworkin particularly succeeds in his attempt to neutralize what I shall call the (double) trivialisation of both morality and human rights.

Moral Judgment Free Speech Moral Consideration Moral Authority Legal Practice
These keywords were added by machine and not by the authors. This process is experimental and the keywords may be updated as the learning algorithm improves.
This is a preview of subscription content, log in to check access.