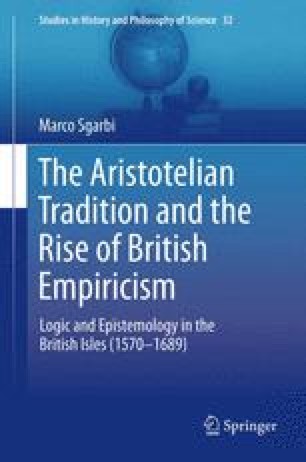 The Reformers of Aristotelian Logic

For the first half of the seventeenth century, as we have seen, Aristotelian logic dominated in the British Isles, pervading not only university, but also sophisticated treatises from outside the university. The consent was almost unanimous, and a British Aristotelian school with an empiricist strand was born and disseminated at the universities. The problem of sensation and induction was paramount to all the most important Aristotelian philosophers, who tried to elaborate a method for scientific knowledge. This is a peculiarity of British Aristotelianism. In Germany, logic was useful for solving theological disputes or as an ancillary discipline to ontology and metaphysics—that is, its study was not primarily the foundation of scientific method.

Scientific Knowledge Inventive Method Universal Concept Mental Concept Deductive Method
These keywords were added by machine and not by the authors. This process is experimental and the keywords may be updated as the learning algorithm improves.
This is a preview of subscription content, log in to check access.