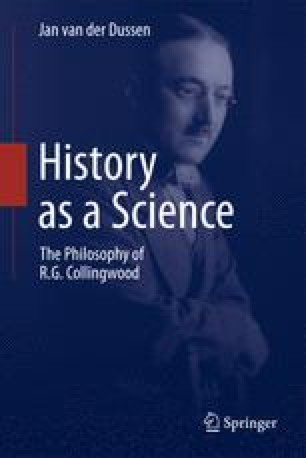 Since March 1978 there have been available for consultation in the Bodleian Library at Oxford about 4,000 pages of Collingwood’s unpublished manuscripts.1 Of the manuscripts that could be consulted at the time of writing, around 2,700 pages deal with a great variety of philosophical subjects, the others mainly with historical and archaeological topics. The former include not only manuscripts on the philosophy of history, but also on epistemology, metaphysics, economics, politics, and art.2 The manuscripts on philosophy of history are important for two reasons. In the first place, they throw new light on the development of Collingwood’s ideas. It is especially fortunate that we now have ample evidence with regard to the development of his philosophy of history in his lectures of 1926 and 1928 (the latter being the ‘Die manuscript’ referred to by Collingwood in An Autobiography (Aut, 107)), and in subsequent notes. Also of great interest are his manuscripts on metaphysics of 1934, 1935 and 1938. In the latter manuscript, which unfortunately is incomplete, he deals with his now much discussed theory of metaphysics as the study of ‘absolute presuppositions’.

Human Nature Historical Fact Fairy Tale Historical Knowledge Historical Method
These keywords were added by machine and not by the authors. This process is experimental and the keywords may be updated as the learning algorithm improves.
This is a preview of subscription content, log in to check access.