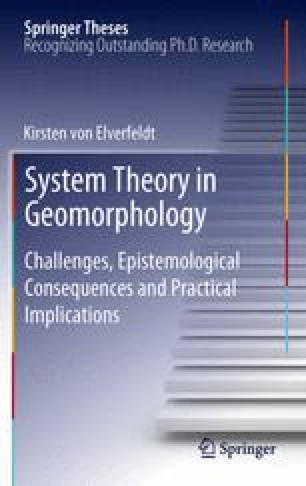 Geomorphology understands itself as applied science, within which—so far—the theoretical foundation only plays a minor role. Against this background, this thesis wants to contribute to a system theoretical foundation of geomorphology. It aims at uncovering the surplus values of theoretical research for the discipline. Methodically, it is based on the observation theory of Heinz von Foerster. Foerster’s understanding of observation differs fundamentally from the everyday (scientific) observation: he defines it as an act of distinction. The criteria upon which an observation, and thus the resulting knowledge, is based, thus can only be recognised in a second step. This second step is called second order observation, and it is this second step, which is taken in this thesis.

Theoretical Foundation Basic Assumption Minor Role Current Approach Applied Science
These keywords were added by machine and not by the authors. This process is experimental and the keywords may be updated as the learning algorithm improves.
This is a preview of subscription content, log in to check access.