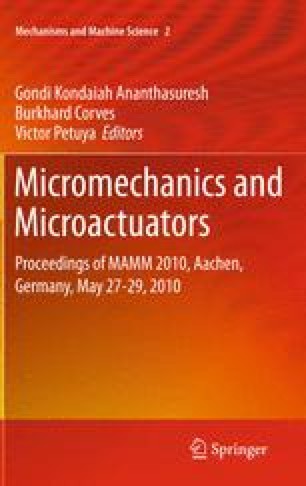 Micromechanics and Microactuators pp 23-29 | Cite as

In this paper, we developed an in-pipe mobile robot which operates in the blood vessels. For this purpose, the diameter of the robot was designed to be equivalent to or smaller than that of blood vessels, assuming the use of the robot in the human aorta. Thus, the diameter of the robot was designed to be less than 2-3 mm. Furthermore, we adopted a mechanism that operates normally even when machining accuracy is not good. Taking into account the scale effect, a design was considered in which the robot is operated in an environment where the effects of friction and surface tension are large and the effects of gravity and inertia are small. As a result, we did not select a mechanism that moves with the use of wheels, but instead adopted a mechanism that utilizes peristalsis to move the robot. In addition, due to the possibility of leakage of electric current, we did not use an actuator operating on an external power supply but one which is operated by hydraulic pressure. With these conditions, we fabricated an in-pipe mobile robot, and the operational characteristics of the robot were studied.

A Part of this study was supported by Grant-in-Aid for Scientific Research C(20500397).