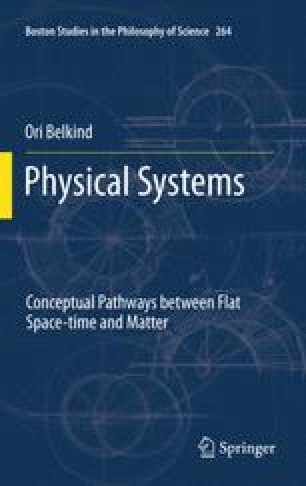 Chapter
Part of the Boston Studies in the Philosophy of Science book series (BSPS, volume 264)

Despite its ubiquitous presence in physical discussions, the notion of physical systems has been under the philosophers’ radar. The significance of the concept has been overlooked primarily because of certain metaphysical dispositions. The modern metaphysical presupposition is that reality is broken into three different layers: spacetime, material properties, and laws of nature that govern the behavior of bodies. This separation between levels of reality considers spacetime as a container within which bodies are located, and bodies to be centers of activity. Spacetime tells us where the body is (or how the field is “spread out”), material properties dictate what these bodies possess, and laws of nature predict how matter will behave over time.

Causal Power Inertial Mass Measured Acceleration Spacetime Symmetry Spacetime Structure
These keywords were added by machine and not by the authors. This process is experimental and the keywords may be updated as the learning algorithm improves.
This is a preview of subscription content, log in to check access.