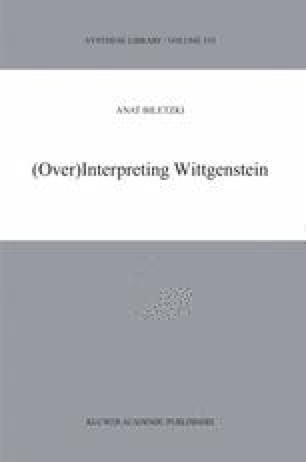 In the beginning there was logicism — that magical “ism” that amalgamated logic and mathematics in such a way as to, first, put logic in the primary (metaphysical, epistemological, or formal) position of the two by basing (or reducing) mathematics on (or to) it. It thereby established logic, for mathematicians, as the foundational structure and form of language, thought, and the world. We have seen what that wrought — providing, in logic, the point upon which (mostly analytic) philosophers could build their philosophy of language and their metaphysics; the point through which Wittgenstein could be interpreted as a philosopher dealing in language and the world, connected precisely by the logic of both. But focusing in so single-minded a fashion on the role logic played one could, inadvertently, forget to notice the mathematical context and content of these logical workings — that is, the historical context of logicism, spawned by Frege and Russell, as the project of reducing mathematics to logic, and the specific content of Wittgenstein’s work having to do with mathematics (with or without its connection to logic). Given that context, such forgetfulness would be inexcusable; Wittgenstein cannot be seen as a logico-linguistic philosopher who might be ignorant of the mathematics-logic linkage so prominent in the times (of his early work). Even more telling is Wittgenstein’s explicit mention of Russell and Frege as those to whom he “owe[s] in large measure the stimulation of [his] thoughts” (TLP Preface).

Mathematical Entity Logical Necessity Mathematical Interpretation Mathematical Proposition Strict Finitism
These keywords were added by machine and not by the authors. This process is experimental and the keywords may be updated as the learning algorithm improves.

There is no rekigious denomination in which the misuse of metaphysical expressions has been responsible for so much sin as it has in mathematics. (Culture and Value 1 )