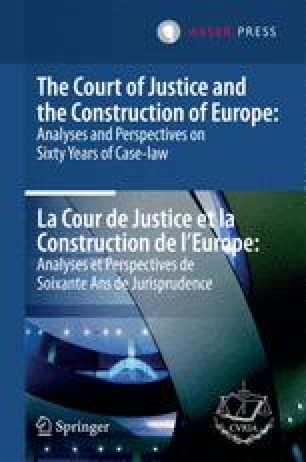 The Court of Justice in the Twenty-First Century: Challenges Ahead for the Judicial System?

This paper looks ahead and seeks to identify future challenges to the judicial system of the European Union. It takes as its starting point that the key to the evolution of EU law has unquestionably been the system of references by national courts to the Court of Justice for preliminary rulings. It is desirable to maintain the principle that all courts and tribunals of the Member States should retain the power to refer. Difficulties are likely to arise in the future, partly from the sheer number of references, but also because of the new areas of law brought within the jurisdiction of the Court of Justice by the Lisbon Treaty. The paper considers several possible reforms, rejecting some suggestions but advancing others, such as the “green light” system, which may deserve further consideration, especially since it may become desirable for the Court to exercise some self-restraint in ruling on references from national courts.

Member State National Court Judicial System Advocate General Lisbon Treaty
These keywords were added by machine and not by the authors. This process is experimental and the keywords may be updated as the learning algorithm improves.

Advocate General at the Court of justice of the European Communities from October 1988 to January 2006. Professor University of London.