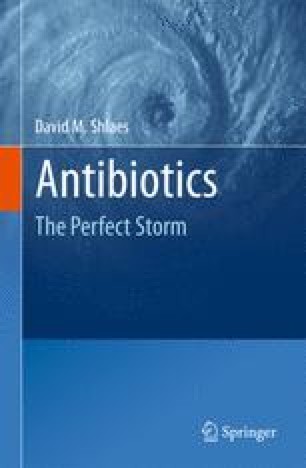 The history of antibiotics goes back to mercury and bismuth, heavy metals which are toxic to people, but in correct doses, were more toxic to the organism that causes syphilis, Treponema pallidum. Mercury as a therapy for syphilis was first discussed back in the 1400s, but the heavy metals were not widely used until the end of the nineteenth century. Whether they were efficacious or not is not entirely clear since no systematic studies like those we use today were carried out in those times. But there is good reason to believe that this therapy worked at least to some extent. Of course, as all of us who like to eat fish know, mercury is also rather toxic to people.

Nobel Prize Streptococcic Infection Correct Dose Childbed Fever Breast Abscess
These keywords were added by machine and not by the authors. This process is experimental and the keywords may be updated as the learning algorithm improves.
Download chapter PDF

The history of antibiotics goes back to mercury and bismuth, heavy metals which are toxic to people, but in correct doses, were more toxic to the organism that causes syphilis, Treponema pallidum. Mercury as a therapy for syphilis was first discussed back in the 1400s, but the heavy metals were not widely used until the end of the nineteenth century. Whether they were efficacious or not is not entirely clear since no systematic studies like those we use today were carried out in those times. But there is good reason to believe that this therapy worked at least to some extent. Of course, as all of us who like to eat fish know, mercury is also rather toxic to people.

Salvarsan, an arsenical compound, was discovered by Paul Ehrlich and his co-workers in 1908 and was marketed in 1910. The arsenicals were discovered based on their activity against parasitic microorganisms, but only were developed as antibiotics when they were active in a rabbit model of syphilis. Salvarsan was dubbed Ehrlich’s magic bullet. He won the Nobel Prize for his discovery in 1908. Again, the kinds of clinical studies we are accustomed to today were not undertaken, but various testimonials from “miracle” cures were used to demonstrate the efficacy of Salvarsan. In retrospect, there are good reasons to believe that the drug had some efficacy in the treatment of human syphilis. The use of the drug was limited by its toxicity – it was based on arsenic after all.

These early efforts point out one of the great challenges of finding good antibiotics. We are looking for something that will kill the microorganism but that will leave its host (us) unharmed. We want a very specific toxin. This is not so easy. The later discoveries of sulfonamides and then penicillin and its relatives misled many into believing that finding such specific microbe killers that were perfectly safe for humans might be less difficult than it is.

The discovery of the sulfonamide antibiotics by Bayer in Germany in 1932 was the next great leap forward for antibiotics. The first such drug was called Prontosil. It was actually a prodrug because it relied on the human body to metabolize Prontosil into its active form, sulfanilamide. It was first synthesized by Bayer chemists Josef Klarer and Fritz Mietzsch. Prontosil was tested and found effective against some important bacterial infections in mice by Gerhard Domagk, who subsequently received the 1939 Nobel Prize in Medicine. Its utility was dramatized in an article in Time Magazine in 1936.

Last month Mrs. Franklin D. Roosevelt, who loves few things better than a big family feast, gave up Thanksgiving dinner at Hyde Park to rush to Boston where Son Franklin Jr. lay abed with what was described to the press as “sinus trouble.” The young man did have infected sinuses, and he was in the capable, Republican hands of Dr. George Loring Tobey Jr., a fashionable and crackerjack Boston ear, nose & throat specialist. He also had a graver affliction, septic sore throat, and there was danger that the Streptococcus haemolyticus might get into his blood stream. Once there the germs might destroy the red cells in his blood. In such a situation, a rich and robust Harvard crewman is no safer from death than anybody else.

Not until last week, when his mother and his fiancée, Ethel du Pont, went home, was Franklin Jr. out of danger and fit for Dr. Tobey to operate on his infected right antrum (in the cheek) and ethmoid sinuses (in the brow). Simultaneously, Dr. Tobey let it be known that his notable young patient had been pulled through his crisis by a notable new drug.

When Franklin Roosevelt’s throat grew swollen and raw and his temperature rose to a portentous degree. Dr. Tobey gave him hypodermic injections of Prontosil, made him swallow tablets of a modification named Prontylin. Under its influence, young Roosevelt rallied at once, thus providing an auspicious introduction for a product about which U. S. doctors and laymen have known little.

The drug which cured young Roosevelt seems to be a specific cure for all streptococcic infections—septic sore throat, childbed fever, postabortal septicemia. It has helped to cure cases of peritonitis due to ruptured appendix, perforated stomach ulcer or gallbladder. It has been effective in postoperative wounds, endocarditis, suppurative mastoiditis, and tonsillitis. Some cases of erysipelas (also a streptococcic infection) have yielded to Prontosil medication. The drug also has ameliorated severe cases of carbuncles and cellulitis due to staphylococcus, a different kind of germ.

Figure 2.1 below shows the mortality rates at Cook County Hospital in Chicago from erysipelas, a serious skin infection caused by Streptococcus pyogenes, the same organism that causes strep throat. Clearly, for this infection, the use of sulfonamides saved lives. The same thing was shown for pneumonia as shown in the table from a 1939 article below.
Dagenan was a sulfonamide antibiotic. As you can see from Table 2.1, the mortality rate for treated patients ranges from 6 to 17.6% while for untreated controls it ranged from 23 to 50%. There is no doubt that in pneumonia, sulfonamides saved lives and did so in a dramatic way.
Table 2.1

Penicillin had even more dramatic effects.

The first patients to be treated with penicillin were in England during 1940. The team of Florey, Chain and Heatley at Oxford University was producing the penicillin. There they had developed a kind of Rube Goldberg apparatus to purify the drug. Florey and Chain went on to win the Nobel Prize for their efforts to characterize, manufacture and test penicillin. There was just a tiny amount of drug such that, because the drug was excreted unchanged in the urine, the urine of the treated patients was collected and the penicillin repurified for use again. One patient, Mr. Alexander, was being slowly “eaten” with a mixed staph and strep infection. He had pus everywhere. One eye had to be removed. His shoulder and lung became infected. Sulfonamides were not helping. He agreed to receive penicillin. Within 24 h, there was dramatic improvement. His temperature returned to normal, his lesions improved and his appetite returned. Five days later, treatment was stopped because they were running out of penicillin and they had not yet had time to repurify the penicillin from the patient’s urine. Of course, no one knew how long one should treat in any case. This is still a problem today I might add. Unfortunately, 10 days later, Mr. Alexander had a relapse of his lung infection and there was no more penicillin to be had. He died a month later.

In 18 months of testing in something like five or six patients, 4 million units of penicillin had been used. This would be roughly equivalent to one sixth of the minimum daily dose we would use for a single patient with pneumonia today.

The first American patient was treated at Yale in March of 1942. Mrs. Miller had staph infection of her bloodstream and was dying. One of the penicillin researchers was hospitalized nearby with a viral infection. Mrs. Miller’s doctors asked him if he would be able to procur penicillin for Mrs. Miller. He did. From Merck. She lived. Her temperature went from 105.5°F before treatment to normal in less than 24 h.

My father was a physician who practiced internal medicine in Chicago his entire life. He didn’t retire until he was 83 years old and was unable to walk independently anymore. He always told a fascinating story about my aunt who had juvenile onset diabetes. Diabetes, for reasons still not very clear, makes people more susceptible to infections. My Dad was doing his internship in New York City in 1944. My aunt developed a breast abscess with staph. The staph then went on to invade her bloodstream. She was septic, on the verge of death. In those days, the military had essentially the entire supply of penicillin (it did not become available to the public until after the war in 1945), but my Dad knew that this was her only chance. He called the public health office in New York who put him in touch with the military from which he was able to procure a small supply of penicillin. He administered several hundred thousand units – a large dose at the time. Within 24 h my aunt was sitting up in bed eating and talking. Her fever was gone in a few days. Based on this experience and others, he always believed in the miracle of antibiotics.

In Table 2.2 we can see data from the pre-antibiotic years compiled by the Infectious Diseases Society of America. They compare controls where treatment might be expected to be ineffective with sulfonamide and penicillin treated patients with serious skin infections. Possibly because this group included patients with infections that are less serious than erysipelas, the cure rates with ineffective therapy are higher than we saw when we just looked at erysipelas earlier. Nevertheless, both antibiotics work and penicillin seems to work even better than sulfonamides.
Table 2.2

Even today, most physicians will be able to relate a story something like my father’s. Of course, most do not have to procure their supply of antibiotic from the military, but they will all be able to tell you about a patient on death’s door who comes back from the brink after a few doses of an antibiotic.

In looking at a chart of US mortality rates going back 125 years (Fig. 2.2), we can see that lots of things contributed to lower mortality besides antibiotics. Better sewers, clean water supplies, better public health measures, and vaccines all contributed to the lowering of mortality rates over the years. The chart above shows where sulfonamides and penicillin were introduced to the market in 1932 and 1943. Many experts feel that the introduction of antibiotics made an important contribution to lowering mortality rates as well. For example, during the last few decades, taking all comers with community-acquired pneumonia of varying degrees of severity, the overall mortality is around 3%.

Today, the miracle of antibiotics is being threatened on all fronts. The bacteria are becoming steadily more and more resistant even to our newest antibiotics. Our ability to discover new antibiotics is restrained by the more difficult science. It seems that nature has already discovered all the best antibiotics. We are further hindered by the lack of researchers in the area. The years of lack of NIH support for antibiotic research have taken their toll. The pharmaceutical industry, our primary source of antibiotics, has been consolidating over the last three decades. The fewer companies there are, the fewer researchers there are. In addition, individual companies have abandoned antibiotics as a field of research. This further contributes to our lack of effort in discovering new antibiotics at a time when discovering them is more difficult. For some patients, we are already back to the year 1900 in terms of available, effective antibiotics. That number of patients can only rise over the next 10 years.