Critical Regimes of Two-Phase Flows with a Polydisperse Solid Phase 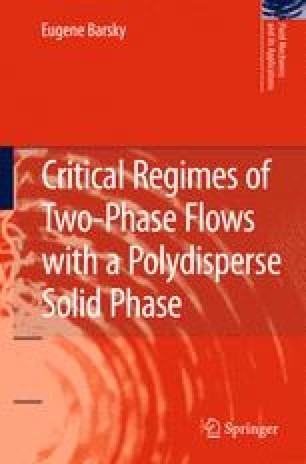 Chapter
Part of the Fluid Mechanics and Its Applications book series (FMIA, volume 93)

7.1 Validation of the Distribution Coefficient

Any apparatus, even a hollow one, can be conventionally represented as comprising a certain number of stages with a directional mass exchange between them. A cascade classifier comprising stages of the same or different construction gives the simplest idea of the staged character of the process.

where \( {r_i} \) is the initial contents of narrow size-class particles at a certain i-th stage of the apparatus; \( r_i^* - \) quantity of the same particles passing from the i-th stage to the overlying (i – 1)th stage; K or \( k - \) distribution coefficient.

A general schematic diagram of particles distribution over the apparatus height at their feeding to the \( {i^* } \)-th stage is presented in Fig. 7.1a. In case of one stage, the process pattern is rather simple (Fig. 7.1b).

We take the initial content of particles of the same narrow class as a unity being clearly aware of the fact that it is fed to be classified in a mixture with other particles.

The dependence (7.3) may serve the basis for designing equilibrium and cascade classifiers, if we manage to establish the dependence of the parameter k on its regime and structural properties of the process.

7.2 Physical Meaning of the Distribution Coefficient

The difference of absolute velocities is algebraic. The flow direction is chosen as a positive direction of \( {u_r} \) and \( {v_r} \) velocities.

Thus, we can determine the limiting size of particles, above which the overflow of particles is certainly turbulent.

Then the distribution coefficient can be written as

A concrete expression of the distribution coefficient can be obtained using a concrete profile of the continuum over the apparatus cross-section. Now we examine step by step possible cases of flow interaction with particles.

7.2.1 Turbulent Overflow of Particles and Turbulent Regime of the Medium Motion in the Apparatus

With the account for the mathematical model of the regular cascade (7.3), this expression well agrees with experimentally obtained dependences.

Two approaches to the study of suspension-bearing flows are the most widespread. The first one considers a two-phase flow as a continuum with averaged properties. Such a dispersoid is characterized by a certain mean velocity, density, etc.

As it is, this approach is unacceptable for a critical flow, since we have to divide the dispersoid into separate phases, because the process result is the separation of each monofraction, which constitute, in total, a discrete phase. Therefore, this approach can be successfully used, for example, for the description of such processes as pneumatic transport, and not for classification.

The second approach consists in a separate analysis of the behavior of each phase. Here, the classification process should take into account numerous random factors. This causes insuperable difficulties in the quantitative description of the results in an explicit form. Therefore, the applicability of this approach is limited. It allows solving the simplest problems of the behavior of two-phase flows and is absolutely inapplicable for describing the classification process on the whole.

As for the classification process, it seems expedient to apply a combined method. Its essence is a transition to a dispersoid with an effective carrying capacity on the basis of the evaluation of the continuum impact on a discrete phase and of the behavior and interaction of individual monofractions. Thus, both the continuum and each separate monofraction participate in the dispersoid formation, and the latter, in turn, affects the behavior of particles of each narrow size class. This implicitly reflects intraphase and interphase interactions on the basis of the continuum.

To substantiate the transition to a “divided” dispersoid, we evaluate the density of monofractions flow. The quantity of particles of a fixed monofraction passing through the apparatus cross-section per unit time can be expressed as
$$ {Q_{\sum {} }} = \frac{{G \cdot {r_s} \cdot {r_i}}}{P} $$
(7.19)
where G is the monofraction mass;

\( P \) is the mass of an isolated particle of a specified narrow size class.

Granulometric composition of the initial material, fractional extraction degrees and particle density flows calculated using Eqs. (7.22) and (7.23) are given in Table 7.1.
Table 7.1

Flow densities of particles of different monofractions calculated by Eqs. (7.22) and (7.23)

These data point to the fact that the densities of particle flows (especially of fine particles) in the apparatus are sufficiently high, although the fine product yield is low. It can be attributed to the fact that fine particles, catching up with coarse ones, exert additional impact on them in comparison with a continuum. Besides, the high density of particles averages and levels out this effect in time. This allows us to pass to the carrying capacity of the flow on the whole (to a dispersoid) and estimate its effect on particles of each narrow size class individually (a divided dispersoid).

It seems reasonable to compare the quantitative value of the particles flow density with experimental data. Thus, Razumov presents experimental data (under the conditions of vertical pneumatic transport) on the number of collisions between the suspension-carrying flow containing a mono-fraction of the size \( d = 2.3\,{\hbox{mm}} \) and the motionless surface with the area \( 1\,{\hbox{c}}{{\hbox{m}}^2}. \) The characteristic parameters of the experimental conditions were as follows:

The obtained results point to an insignificant change in the flow density of the dispersoid affecting individual narrow classes of particles. On the average, in the present case we can assume \( {\rho_n} = 2.0\,{\hbox{kg/}}{{\hbox{m}}^3} = const \) as a first approximation for all monofractions. It is noteworthy that for materials without sharp granulometric differences, the difference in the mean flow density is insignificant. For more exact estimations (or for materials with extremely different compositions), it is recommended to use Eq. (7.35) for each monofraction.

Another important issue arising at a transition to the dispersoid is to evaluate its structure, the profile of its velocity distribution over the apparatus cross-section. Equations (7.26) and (7.27) implied a dispersoid with local effective velocities u. A transition to \( {\rho_n} \) was realized at the expense of the momentum transfer from fine particles to coarse ones. The flow density \( {\rho_n} \) was assumed to remain unchanged over the apparatus cross-section owing to the assumption of a uniform distribution of particles. Since the local carrying capacity per unit area is characterized by the product \( {\rho_n}{u^2}, \) its profile should be affine or uniform with respect to the distribution of squared dispersoid velocities in the cross-section. Taking into account its affine transformation with the scale factor 0.5 and nonlinear square-root transformation, we obtain the profile of effective dispersoid velocities close to a parabolic one. Since the volume flow rate of a dispersoid should be equal to a continuum volume flow rate, the equation of dispersoid velocity distribution should be written as
$$ f\left( {\frac{r}{R}} \right) = 2w\left[ {1 - {{\left( {\frac{r}{R}} \right)}^2}} \right], $$
(7.36)
which corresponds to the parameter \( n = 2. \)

Obviously, the above-stated estimation should be considered as approximate, because it is based on a number of assumptions.

7.4 Analysis of Experimental Dependencies from the Standpoint of Structural Models

Principal regularities of the gravitational classification process were revealed experimentally on various cascade apparatuses. Now it has become possible to explain experimental facts from the standpoint of structural and cascade models.

The same expressions allow us to take into account separation results depending on the number of stages in a cascade apparatus (classifier height) and on the material feeding place.

The effect of structural differences of various apparatuses on the fractioning process is taken into account by the application of different cascade models.

7.5 Check of the Structural Model Adequacy

The account for the flow structure allows a more objective approach to the prediction of fractionating results on apparatuses of different constructions. Without dwelling on extremely complicated patterns of flow formation in actual apparatuses, for their roughest examination we should single out three characteristic properties of a moving flow that can be connected with the apparatus construction:

Thus, for example, a velocity field of a continuum can be both uniform and non-uniform along its height. Operation of hollow (equilibrium) apparatuses of a constant cross-section is the closest to the former case. A uniform velocity field stipulates for an identical regime of flow interaction with particles at any level of the cross-section and predetermines the invariability of the distribution factor over the apparatus height. The model of regular cascade satisfies most completely such conditions of the process organization.

The expression (7.49) for square and rectangular cross-sections is recommended only as a first approximation, since actual filling rates are somewhat higher.

Finally, at the first stage of the process, a significant fall of the majority of particles with respect to the level of their inlet is observed in the absence of intense interaction of particles with internal components of the apparatus and in the presence of stagnant zones. Apparently, the most favorable conditions for their skip are realized in a hollow apparatus of square or rectangular cross-section.

In the light of the statements above, we have made an attempt to predict quantitative results of fractionating process for several apparatuses of various designs. Computation results are presented in respective figures in comparison with experimental data.

Maximal deviation of the estimated curve from experimental points does not exceed 15%.

In all the cases, maximal deviation of the estimated curve from experimental points does not exceed 7%, which is within the limits of experimental accuracy.

7.6 Correlation Between the Structural and Cellular Models of the Process

This dependence totally complies with empirical dependencies for actual separation curves, which were confirmed over and over again, but have not found as yet a clear theoretical justification.