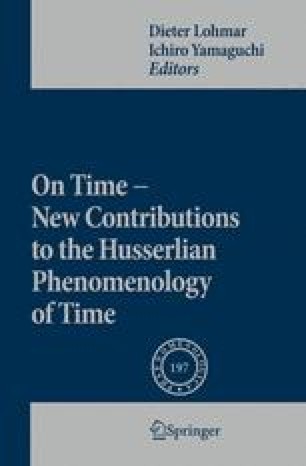 Phenomenology of “Authentic Time” in Husserl and Heidegger

In his dialogue the Timaeus, Plato recognized two aspects of time, the past and the future, but not the present. In contrast, Aristotle’s analysis of time in the Physics took its orientation from the “now”. It is the latter path that Husserl follows with his conception of the “original impression” (Urimpression). However, in certain parts of Husserl’s Bernau Manuscripts, the present loses significance because of a novel interpretation of protention. This development, which revitalizes Plato’s understanding of time, is furthered in Heidegger’s late lecture Time and Being: the present can be understood on the basis of the “withdrawal” which determines the mutual relation between the arrival as authentic future and the having-been as authentic past.

Mutual Relation Original Experience Internal Time Objective Time Original Impression
These keywords were added by machine and not by the authors. This process is experimental and the keywords may be updated as the learning algorithm improves.

*Reprinted from: International Journal of Philosophical Studies, 15(3), 327–347. With kind permission of the publishers Taylor & Francis.

An earlier version of this paper was published in French as “Phénoménologie du ‘temps authentique’ chez Husserl et Heidegger”, Etudes phénoménologiques, 37/38 (“Heidegger et la phenomenology”) (Brussels, 2004). The German text translated here appeared in 2005 in the journal Interdisziplinäre Phänomenologie (Kyoto/Japan) and in Internationales Jahrbuch für Hermeneutik. Parts of this translation were adapted from a lecture version of this paper translated into English by Alexander Heine.