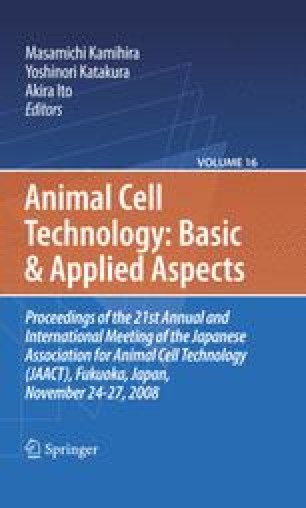 Electrolyzed reduced water (ERW) has been reported to scavenge intracellular reactive oxygen species (ROS) and improve oxidative stress-related diseases. A new culture method using water medium for Caenorhabditis elegans (C.elegans) was developed in order to elucidate the effects of ERW on the lifespan of nematode. ERW significantly extended the lifespan of C. elegans and alleviated the ROS Level in nematode in water medium, but not in conventional S-medium. These results suggested that the nematode lifespan was elongated at least in part by ROS-scavenging action of ERW.

According to the free radical theory of ageing, ageing is the result of the accumulation of molecular damage caused by free radicals. Free radicals, particularly reactive oxygen species (ROS), such as singlet oxygen (1O2), superoxide (O2 • -), hydrogen peroxide (H2O2), and hydroxyl radical (OH•) are considered to cause extensive oxidative damage to biological macromolecules such as DNA, proteins and lipids. The correlation between delayed ageing progression and oxidative stress resistance has been testified many times over the years in Caenorhabditis elegans (C. elegans) and many other model organisms. It has been shown that vitamin E [5], tocotrienols [6], EGB761, which is an extract of Ginkgo biloba leaves [7] and CoQ10 [8] can prolong the lifespan of C. elegans by increasing resistance to oxidative stress. Recently the antioxidative and anti-ageing properties had also been found in platinum nano-particle solution [9].

The wild-type N2 strain was provided by Dr. K. Nomura, Department of Biology, Faculty of Sciences of Kyushu University. The worms were maintained at 20ºC, according to the procedures established by Brenner [10]. Age-synchronous populations were prepared, as previously described by Emmons et al. [11]. Briefly, collected eggs were hatched overnight at 20ºC in S-basal buffer, which consisted of 100 mM NaCl, 0.01 mM cholesterol, and 50 mM potassium phosphate (pH 6.0), on nematode growth medium (NGM) agar plates [12]. Hatched worms (L1-stage larvae) were transferred to fresh NGM agar plates and cultured at 20ºC or 25ºC with Escherichia coli strain OP50 (E. coli OP50) as a food source, until they reached L4 larval stage.

The other one, called water medium, was designed especially for electrolyzed water. Water samples were adjusted to pH 7.0 with HEPES, and heat killed E. coli OP50 (2×109 bacterial cells/ml) was added in the medium as a food resource. We also added 50 μM FUdR into the culture mediums during the assays to prevent worm death due to internal hatching. Dishes were shaken in a gyratory shaker at 120 oscillations/min [13].

For the lifespan assay, L4 larvae were transferred to each culture medium. The transfer day was designated as Day 0. The worms were transferred to fresh culture medium every second day and the surviving worms were counted at the same time. The mortality data were derived from Kaplan–Meier survival curves, and statistical comparisons of mean lifespan values between the control and ERW group worms were analyzed by log-rank test.

Nematodes were cultured with ERW medium or MQ medium until Day 5. After Day 5, worms were picked up and washed extensively with M9 buffer (22 mM Na2HPO4, 22 mM KH2PO4, 85 mM NaCl, 1 mM MgSO4, 0.02% gelatin), then incubated with 0.4 M paraquat (Supelco, USA) for 5 h. The worms were washed three times with M9 buffer and then transferred to 2 ml of Hank’s solution (0.44 mM KH2PO4, 5.37 mM KCl, 0.34 mM Na2HPO4, 137 mM NaCl, and 5.55 mM D-glucose) that contained 10 mM DCHFDA (Invitrogen, USA) and incubated for 30 min at 20ºC. Finally, the worms were fixed with 4% formaldehyde and subjected to laser scanning confocal microscopy (OLFV-32U2/XE; Olympus Co., Japan, excitation at 488 nm and emission at 510 nm) [9]. The relative fluorescence of the whole worm body was determined densitometrically using the Olympus FV10-ASW 1.4 software. The statistical significance of differences between the control and treated groups were determined by one-way ANOVA.

Ageing is associated with intracellular damage, which is caused by endogenous and exogenous oxidative stress. We measured the effects of ERW medium on the intracellular accumulation of ROS induced by paraquat. Worms cultured in TI-200 ERW medium reduced the level of ROS generated by 0.4 M paraquat-induced oxidative stress compared with the control (74.95 ± 7.8%, p < 0.01) (Fig. 2).

Our former research showed ERW has an ability to scavenge the intracellular ROS in multiple types of cultured animal cells. Since ERW medium can significantly extend the nematode lifespan, we assumed that the ROS scavenging ability of ERW is responsible to the prolonged lifespan of C.elegans we have observed. In order to confirm the assumption, we detected the ROS level in C.elegans, and the results showed that in the conditions of water medium, ERW significantly alleviated the accumulation of ROS induced by the paraquat compared to Milli Q. ERW also suppressed the ROS level in nematodes without treatment of paraquat. On the other hand, nematodes showed much lower levels of ROS in S medium than in water medium. ERW did not exhibit suppressive effect of ROS level in S medium. Taken together, it is reasonable to believe that ERW have benefits to animals’ lifespan by at least in part by the scavenging ability of ROS.