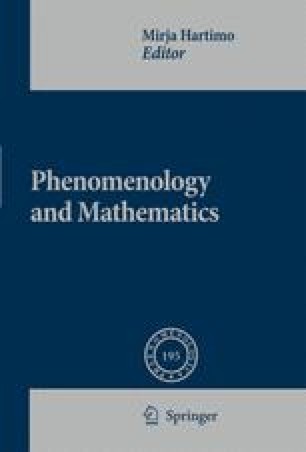 Phenomenology and Mathematics pp 23-46 | Cite as

In this paper I try to offer a definitive answer to the question of the relation of Husserl’s phenomenology to mathematical Platonism and constructivism of the Brouwerian sort. The controversial issue of Frege’s presumed influence on Husserl is also considered and it is briefly argued against such an influence. In the second part of the paper Husserl’s semantics of sense and objectuality (or referent) is discussed, and it is shown that it is much more adequate for mathematics than Frege’s semantics. Finally, a possible theory of degrees of extensionality is briefly sketched.

Compact Hausdorff Space Conceptual Content Mathematical Fact Transcendental Phenomenology Unify Field Theory
These keywords were added by machine and not by the authors. This process is experimental and the keywords may be updated as the learning algorithm improves.
This is a preview of subscription content, log in to check access.

On Tappenden, Frege and Fregean Mythologies

In his recent paper “The Riemannian Background to Frege’s Philosophy” Jamie Tappenden (2006) argues on behalf of a presumed allegiance of Frege to the Riemannian tradition. According to Tappenden, there were two irreconcilable trends in nineteenth century German mathematics, the school of Weierstrass and Kronecker in Berlin and the Riemannian school in Göttingen. Tappenden begins his discussion by considering two presumed myths in Fregean scholarship, namely, (i) that which he associates with Russell, according to which Frege followed the Weierstrassian program of reducing analysis to the real number system, which was then reduced to the arithmetic of natural numbers and then, finally, thanks to Frege, to logic; and (ii) that which he associates with Kitcher, Currie, Wagner, and Weiner, for which Frege’s motivations were purely philosophical and unrelated to Weierstrass’ mathematical concerns. Tappenden proposes a third myth, namely, that since there were only two mathematical traditions in the German universities of his time, and Frege studied in Göttingen, learned complex analysis in the Riemannian tradition from Clebsch and geometry from Schering, he must have been immersed in the Riemannian tradition all the way. Moreover, Tappenden argues that when teaching complex analysis, Frege did it following the footsteps of his teacher, thus, in the Riemannian fashion. That is, however, an incredible historiographical simplification. Firstly, it is perfectly understandable that if you are not a researcher in a particular area of your discipline—and Frege certainly was not a reasercher in complex analysis—, but have to teach courses in that area—remember that the mathematics department in Jena was rather small and that Frege was not a full professor—it is perfectly natural that you tend to follow, possibly with some small modifications, what you learned from your teachers in that area. Hence, it was much easier for Frege to teach complex analysis in the way he learnt it from Clebsch than to try to immerse himself in the Weierstrassian tradition or to try to build a version of his own.

On the other hand, it is not uncommon of men of Frege’s stature that in the points that interest them most they distance themselves from their teachers. Thus, for example, Dedekind came from the Gauss-Riemann school, was the last (official) doctoral student of Gauss and a personal friend of Riemann, but followed the reductive path of Weierstrass and was a logicist, as Frege was. Indeed, when Frege criticizes Dedekind at the beginning of Grundgesetze I it is for his lack of rigour, not for having taken a wrong reductive path. Moreover, Cantor and Husserl were students of Weierstrass and Kronecker—as was also Minkowski—, and Husserl was even Weierstrass’s assistant. Nonetheless, Cantor’s set theory had little to do with Weierstrass’s or Kronecker’s research, and, on the contrary, only served to awaken ire in the latter, who used all his academic influence to make life miserable to Cantor. In Husserl’s case, his mature philosophy of mathematics—from 1894 until the end of his life—is based on a sort of generalization of Riemann’s notion of a manifold, has nothing in common with the Weierstrassian school, and also very little in common with Frege’s views, except for being both Platonisms, though different sorts of Platonism. Furthermore, Frege almost never refers to Riemann, even in his posthumous writings. On this issue, a comparison with Husserl is especially pertinent. On the other hand, in Die Grundlagen der Arithmetik Frege propounds the view that geometrical statements are synthetic a priori, that geometry is based on intuition, that such an intuition is Euclidean, and that Non-Euclidean geometries are merely objects of thought. Although Frege’s arguments differ from those of Kant, their views on geometry are very similar. In fact, Frege’s views on geometry were pre-Riemannian. On this specific point, Frege and Husserl also differed, and Husserl was once more much nearer to Riemann, but I cannot dwell on this issue here.

Concerning the different myths in Fregean scholarship, I want to make a few comments. I consider Frege essentially a philosopher of mathematics, certainly not a philosopher of language and by no means an epistemologist. His concerns with semantics are derivative, and his concerns with epistemological issues are not only derivative but also restricted to particular issues related to the nature of mathematics and logic. I consider correct the view that sees Frege’s logicist program of reducing arithmetic to logic as an extension of the Weierstrassian program, and as a culmination of what Weierstrass and Dedekind had achieved, even though Frege was, by no means, a Weierstrassian, and was very critical of Weierstrass’s lack of rigour. But without the reduction of analysis to the real number system and then, further, to the arithmetic of natural numbers, Frege’s logicist program would not make much sense. That sort of mathematical reduction to logic, however, had nothing to do with Russell’s empiricist and nominalist tendencies, which Frege would have clearly rejected. Frege was an avowed Platonist and a rationalist, and would never had accepted the use of logical analysis to defend nominalism or empiricism. On the other hand, the tendency—predominant in Anglo-American Fregean scholarship—to interpret Frege as a sort of Neo-Kantian philosopher and as an avowed epistemologist is certainly unfounded. It basically originates in clear misinterpretations of Fregean writings, usually isolating a single sentence from its whole context in order to fit the prejudices of the so-called Fregean scholars. The papers by Sluga, Beaney, Reck and Macbeth included in a recent book edited by Dirk Greimann (2007) are foremost examples of such and other sorts of misinterpretations. Finally, it should be pointed out that Frege, who was such a revolutionary in logic and a most interesting and important philosopher of mathematics, was usually not capable of understanding or at least appreciating other revolutionary advances in mathematics, as attested by his lack of understanding of Cantor exemplified at the end of Die Grundlagen der Arithmetik, and precisely by his adherence to a pre-Riemannian, Kantian conception of geometry.