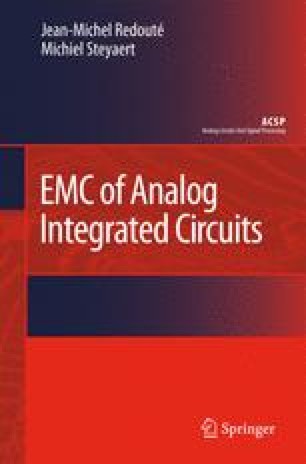 In this chapter, the effect of EMI injection in output nodes of analog circuits is studied. A general framework is developed, categorizing the EMI behavior of output structures into two major families, namely output circuits of the common-drain type and those of the common-source type. It is shown mathematically that output circuits of the common-source type are much more immune to EMI compared to their common-drain counterparts. These observations are applied in three designs, namely an externally trimmed DC current reference circuit with high EMI immunity, and two integrated EMI resisting LIN drivers.

Duty Cycle Output Circuit Source Follower Analog Integrate Circuit Small Signal Analysis
These keywords were added by machine and not by the authors. This process is experimental and the keywords may be updated as the learning algorithm improves.
This is a preview of subscription content, log in to check access.