Contrast-Enhanced Ultrasound of the Urinary Tract 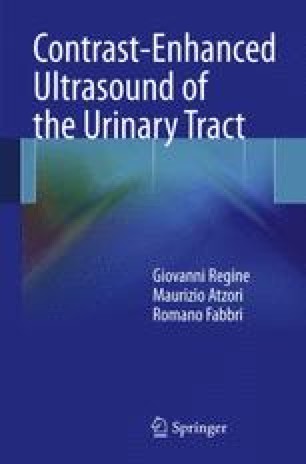 One can find many published studies on the use of second-generation ultrasound contrast media (UCM) for kidney disease, but in recent years there have been an increasing number of publications regarding applications for other organs: the kidney, small intestine, pancreas, testes, and prostate [1]. The reason for this shift is in the unique chemical and physical characteristics of the contrast medium employed, which in this case is comprised of sulphur hexafluoride microbubbles with a diameter of 2–5 μm. Because of their size, once introduced into the blood stream they cannot be diffused into extravascular spaces. Thus, they take on similar characteristics to blood-pool contrast media, with the difference that they can pass through the pulmonary alveolar-capillary membrane and therefore be disposed of primarily through the respiratory process. This means of elimination makes second-generation CM recommendable for patients with renal disease for the lack of nephrotoxicity in the microbubbles [2]. Another feature of second-generation CM is the very low incidence of allergic reactions compared to gadolinium-based or iodinated CM. Currently, its use is indicated as unsafe in cases of: recent heart attack (<7 days), right to left shunt, severe pulmonary hypertension, pregnancy, lactation, or severe cardiac disease (III/IV class) [3]. In the execution of a contrast-enhanced ultrasound, one can make use of a wide range of software original to the apparatus. The current most frequently used technique is that referred to as conservative, or non-destructive: the acoustic pressure applied does not cause the microbubbles to burst, but uses non-linear oscillation to generate the echo amplification of the ultrasound signal. The pressure is measured by the mechanical index (MI). The conservative method uses a low MI, in contrast with the past use of the destructive method, in which the amplified ultrasound signal was achieved, after having broken the microbubbles, by employing a raised MI with the intensity of the signal with a shorter duration [2, 4].

Mechanical Index Severe Pulmonary Hypertension Early Arterial Phase Late Arterial Phase Color Doppler Signal
These keywords were added by machine and not by the authors. This process is experimental and the keywords may be updated as the learning algorithm improves.
This is a preview of subscription content, log in to check access.