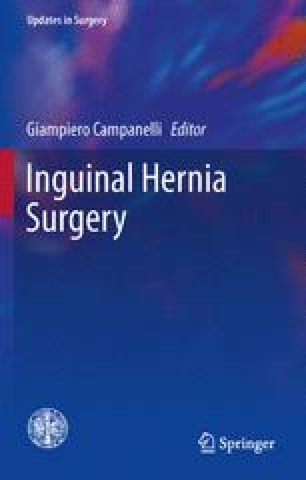 Chapter
Part of the Updates in Surgery book series (UPDATESSURG)

The Polysoft patch for inguinal hernia repair was conceived on the basis of the following specifications:

A flat mesh, equipped with a memory-ring made of absorbable material, so that only the flat mesh remained in place after the memory-ring was absorbed, fulfilled these specifications. This was the concept of the initial Pélissier patent (1998).

Two trials were undertaken by the inventing author to assess this concept. The first one was carried out on a series of patients with a weak posterior wall, using a technique derived from the Rives technique, which consisted of...

Lateral Compartment Spermatic Cord Inguinal Canal Preperitoneal Space Transversalis Fascia
These keywords were added by machine and not by the authors. This process is experimental and the keywords may be updated as the learning algorithm improves.
This is a preview of subscription content, log in to check access.