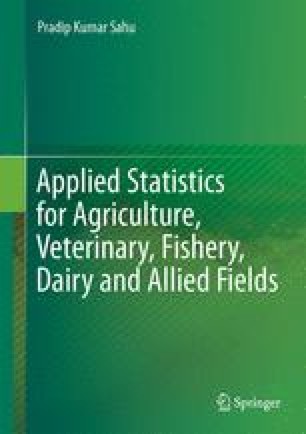 Probability Theory and Its Application

In our daily life, we are experienced about the fact that occurrence or nonoccurrence of any event/phenomenon is associated with a chance/uncertainty factor. We are always in search of likelihood of happening or nonhappening of event/phenomenon. The farmers who want to have plant protectional spray on a particular day will be interested to know the likelihood of raining before and after spray so that the effect of spray is not washed out by the occurrence rain. A fish farm will be interested to spend money on a particular type of feed only knowing after likelihood of increasing body weight of fishes by the new feed. In statistics, the likelihood of happening or nonhappening of an event is generally known as probability. Probability is a mathematical construction that determines the likelihood of occurrence or nonoccurrence of events that are subjected to chance factor. Thus the farmers are interested to know the probability of occurrence of rain before and after spraying. As we have already discussed, the subject matter of statistics is concerned with drawing inference about the population based on observations recorded, mostly from sample. In this regard probability plays a great role. Noting a particular character (say percentage of cancer patients or percentage of disease affected area in a field), in a sample the experimenter wants to infer about the (percentage of cancer patient or percentage of disease-affected area as a whole) population, with a probability. Greater is the probability of drawing accurate inference about the population; better is the inference about the population.

Rain Occurrence Disease-affected Areas parameterParameter skewnessSkewness Random Experiment
These keywords were added by machine and not by the authors. This process is experimental and the keywords may be updated as the learning algorithm improves.
This is a preview of subscription content, log in to check access.