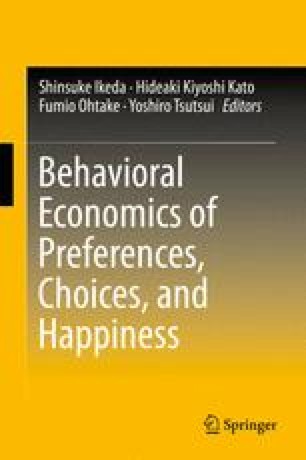 Behavioral Economics of Preferences, Choices, and Happiness pp 573-589 | Cite as

A Geometric Approach to Temptation

We provide a simple geometric proof of the Gul and Pesendorfer’s (Econometrica 69(6):1403–1435, 2001) utility representation theorem about choice under temptation without self-control. We extract two incomplete orders from preferences: temptation relation and resistance relation. We characterize those relations geometrically and obtain temptation utility using a separation method à la Aumann (Econometrica 30(3):445–462, 1962).

The original article first appeared in the Journal of Mathematical Economics 48:92–97, 2012. A newly written addendum has been added to this book chapter.

I would like to express my appreciation to Hideo Suehiro for invaluable discussions and encouragement. I would also like to thank Kazuya Hyogo, Hajime Kobayashi, Noriaki Matsushima, Eiichi Miyagawa, Wolfgang Pesendorfer, and Norio Takeoka for their valuable comments and suggestions. Very useful remarks of two anonymous reviewers and the editor have lead to an improved presentation of the results. Responsibility for any remaining errors rests with the author. The addendum part was supported by JSPS KAKENHI Grant Number 24730166.

Addendum: On the Geometry of Temptation and Self-Control13

As stated in Remark 2, Abe (2011) demonstrates the usefulness of our geometric approach to menu preferences beyond the Strotz model. By taking the geometric approach, Abe (2011) provides an alternative proof of the costly self-control representation theorem in Gul and Pesendorfer (2001).14, 15 Here, we briefly supplement Remark 2 by providing an outline of the proof provided in Abe (2011).

The costly self-control models are characterized by a behavioral regularity on menu preferences named Set Betweenness.

Set Betweenness relaxes No Self-Control and allows for the possibility that \(A \succ A \cup B \succ B\). This possibility displays the notion of temptation and costly self-control. Suppose that B contains a tempting alternative. We can view \(A \cup B \succ B\) as meaning that when facing menu \(A \cup B\), the individual uses self-control and can resist the temptation. We then interpret \(A \succ A \cup B\) as meaning that exercising self-control is costly. The main theorem in Gul and Pesendorfer (2001) is summarized as follows.16

We provide the proof outline on the sufficiency of the axioms in Abe (2011). In what follows, let U be a utility representation of \(\succapprox\) derived as in Lemma 1 and u be a commitment utility derived by restricting U on singleton menus. Consider a nontrivial preference relation \(\succapprox\), that is, there are x, y ∈ Δ such that \(\{x\} \succ \{ y\}\). The proof outline is as follows. First, in a similar way as in Sect. 3, we can characterize the geometry of temptation under Set Betweenness. Specifically, Set Betweenness induces the following four strict partial orders satisfying Strong Independence.
Furthermore, the weak temptation relation T and the weak resistance relation R are both Strong Archimedean. Define four cones corresponding to the four relations as follows.

Third, we can characterize U with w and v. The next lemma establishes this.