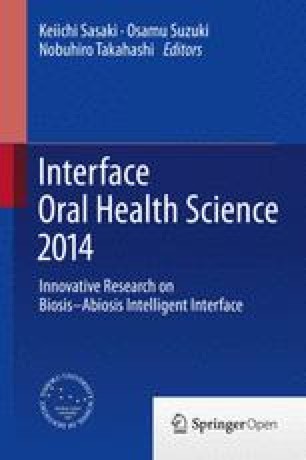 Mechanical property of the skin is one of the important factors for diagnosis of human skin diseases. In this paper, we proposed a novel method for estimation of shear wave velocity from deformation induced by an arterial pulsation. The induced deformation was measured by high frequency ultrasound. The elasticity of the in vivo human skin is evaluated based on the calculated parameters. P(VDF-TrFE) transducer with the central frequency of 100 MHz was used for imaging. The aperture diameter of the transducer was 2 mm, and the focal length was 4 mm. The repetition rate was 2,600 Hz. The sampling rate was 1 GS/s with 8 bit. The velocity induced by pulsation was measured by 1-D cross-correlation method at each depth. The shear wave velocity was estimated from the measured velocity. The shear wave velocity at the epidermis was 0.14 m/s, and the velocity at the dermis was 0.06 m/s. Because the stiffness of the skin was proportional to the shear wave velocity, the elasticity of the epidermis was higher than that of the dermis. These estimated elasticity well conformed to the histology of the skin and the past reports.

Mechanical properties of human skin are the important factors not only in medicine field but also in cosmetic field. Especially, viscoelasticity of human skin is closely related to collagen and elastin of human skin. Also, it’s considered that the viscoelasticity is linked to microstructures within the dermis, which are sebaceous glands, hair follicles, and capillary blood vessels. Flexibility and retractility of human skin may change with the changes in these combinations.

High frequency ultrasonography (HFUS) enables to achieve high-resolution measurement because the resolution is equal to one-half wavelength of ultrasound. An axial resolution of 20 μm is acquired at 75 MHz, and a penetration depth of 75 MHz ultrasound is about 2.0 mm at most. HFUS with a center frequency of 100 MHz is much suitable for in vivo measurement of human skin because it’s possible to observe not only the microstructures but also whole area of human skin. The microstructures of the human skin have been observed by HFUS at the central frequency of 100 MHz [1]. The hair follicles were reported as hypo echoic and the dermis was reported as echo-rich. Also, the human skin was observed using spherical focused single-element transducer with a center frequency of 20 MHz, [2] and the elasticity of the skin was assessed by applying suction to the skin surface with a stepwise increase in vacuum [3]. Additionally, the nevus inside the dermis was observed by strain imaging. In our previous study [4], the human skin structures, especially the sebaceous glands deeper in dermis, were observed by three-dimensional ultrasound microscopy with a central frequency of 120 MHz. This study revealed that the sebaceous glands also act as a cushion of the skin in addition to their classical role of secreting sebum and some hormones [5]. Additionally, viscoelasticity of the skin was estimated from displacements measured by Cutometer (MPA580, Courage and Khazaka, Köln, Germany) and Voigt model [6].

Elastography is a common technique that estimates mechanical properties of the tissue. Especially, viscoelasticity is a key parameter for a diagnosis of cancer and fibrosis. There are several kinds of elastography: strain elastography [7, 8, 9, 10, 11], acoustic radiation force impulse (ARFI) imaging [12, 13, 14, 15, 16, 17], shear wave elastography [18, 19, 20, 21, 22] and transient elastography [23, 24]. The difference among these techniques is difference of what induces the deformation inside tissues. Recently, passive elastography [25, 26] has been attracted attention. This passive elastography is based on Green’s function retrieval and utilize periodic physical motions, which are induced by heartbeats, breathing and so on. In our research group, deformations inside in vivo skin due to arterial pulsation were measured by HFUS with 100 MHz, and the viscoelasticity of human skin was evaluated based on measured deformation itself.

Our goal is to develop high frequency ultrasound elastography using intrinsic deformation induced by pulsation to reveal the origin of the skin viscoelasticity. In this paper, we proposed a novel method for estimation of elasticity the arterial pulsation as an intrinsic deformation. The induced deformation is measured by high frequency ultrasound, and the velocity is calculated from the displacements at several points. The elasticity of the in vivo human skin is evaluated based on the calculated parameters.

Figure 21.1 shows a schematic of an experiment system. An electric impulse was generated by a high speed switching semiconductor. The start of the pulse was within 400 ps, the pulse width was 2 ns and the pulse voltage was 40 V. The frequency of the impulse covered up to 500 MHz. The electric impulse was used to excite a vinylidene fluoride and trifluoroethylene P(VDF-TrFE) transducer. The aperture diameter of the transducer was 2.0 mm, and the focal length was 4 mm. The central frequency was 100 MHz, the bandwidth (−6 dB) was 40–120 MHz, and the pulse repetition rate was 2,800 Hz. First, the transducer was mounted on the X-Y scanner with two linear servo motors that were controlled by X-Y scan controller connected to the serial port of the PC. The scan area was 2 × 2 mm with 100 × 100 pixels. Four pulse echo sequences with 4,096 sampling points along the depth z were averaged for each scan point in order to increase the S/N ratio. Consecutive 100 B-mode images were produced from the RF data by a conventional image processing algorithm of echography. Next, the measured positions were decided from the B-mode images. Figure 21.2 shows a schematic of an elasticity measurement. In this paper, a deformation induced by the pulsation was used as a source. With the position of the transducer fixed, the reflections from the skin in a forearm were received by the transducer and were introduced into a Windows-based personal computer (PC; Pentium 4, 3.40 GHz, 1 GB RAM, and 250 GB HDD) with a high-speed digitizer card (Acqiris DP 1400, Geneva, Switzerland). The sampling rate was 1 GS/s. The duration of the measurement was 2.5 s. The received data were converted to M-mode images. Obtained RF signals of each scanning line was converted to B-mode image by a conventional image processing algorithm of echography.

Subject is one 24-year-old healthy male. A measurement area is skin in his forearm.

The deformation induced by arterial pulsation were measured with high frequency ultrasound. The acceleration and the shear wave velocity were calculated from the measured velocity. These estimated parameters well conformed to the histology of the skin and the past reports. We believe this proposed method is very useful to evaluate the elasticity of the human skin.