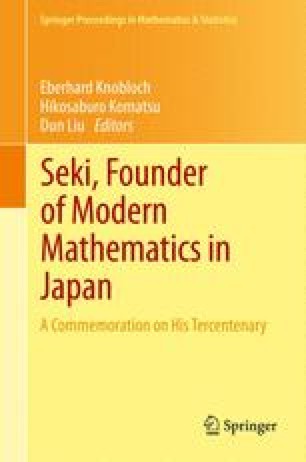 The mathematics developed properly in Japan during the Edo period (1603–1867) is called Wasan (Japanese Mathematics). Its roots are in the ancient Chinese mathematics which flourished in the Song and Yuan dynasties (962–1368), in particular, but the later developments in Japan have been thought to be independent of China or Europe. The author claims, however, that Wasan was influenced by Europe first through Chinese translations of European books starting with the Fundamentals for Astronomy (1629), which was purchased by a son of Tokugawa Ieyasu as early as 1632, and from the end of the eighteenth century on directly through books in Dutch.

Eighteenth Century Complete Treatise Regular Polyhedron Dutch Book Yuan Dynasty
These keywords were added by machine and not by the authors. This process is experimental and the keywords may be updated as the learning algorithm improves.

This work was supported by Grant-in-Aid for Scientific Research (C) 8500760.