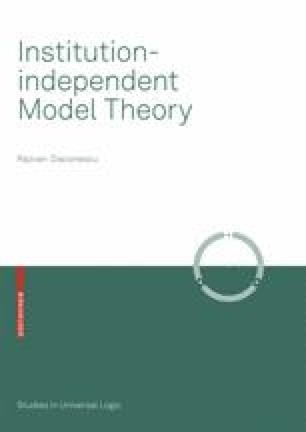 In many institutions the satisfaction relation between models and sentences is defined by induction on the structure of the sentences. Usually sentences are formed from ‘atomic’ sentences, which constitute the starting building blocks, by applying iteratively constructs such as quantifiers and connectives. The connectives may be Boolean or potentially of another kind, such as modal for example. The definition of a satisfaction relation in these institutions can be seen as a two-layered process. At the base level, one defines satisfaction of the ‘atomic’ sentences. Then the induction step consists of a definition of satisfaction for the quantified sentences and of sentences formed by Boolean (or another kind of) connectives on the basis of satisfaction of the components. This Tarskian process of determining the actual satisfaction between models and sentences is a common pattern for a multitude of institutions and has an institution-independent nature. The uniform treatment at a general institution-independent level of the semantics of Boolean connectives, quantifiers, and to some extent even of the atomic sentences, is the gate to institutionindependent model theory and constitutes the main topic of this chapter.

General Substitution Satisfaction Condition Relation Symbol Signature Extension Internal Logic
These keywords were added by machine and not by the authors. This process is experimental and the keywords may be updated as the learning algorithm improves.
This is a preview of subscription content, log in to check access.