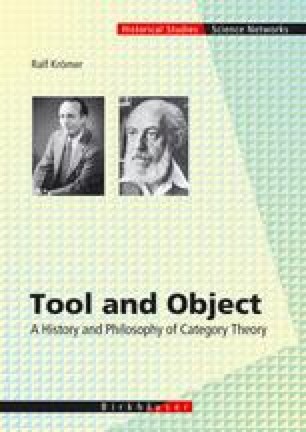 Before around 1955, CT was almost exclusively used in algebraic topology and served there, at least up to Eilenberg and Steenrod, mainly as a conceptual (or linguistic) framework for the organization of a knowledge system. Arrows and arrow composition played an important role there, and the new framework emphasizing these aspects changed considerably the organization of topology as a whole (compare [Volkert 2002] chapter 6), but this change was rather a shift of emphasis from problem solving to conceptual clarification than direct progress in solving the problems formerly considered as central in the discipline (as, for instance, the classification of 3-manifolds). In the domain of algebraic topology, it was Kan who entered first a level of conceptual innovation on which CT came to serve also as a means of deduction. This means that results in the topological context have been obtained by the application of results established on the categorial level—results deeper than those available using solely the base concepts of category theory, i.e., results the proof (and already the formulation) of which used new, more involved concepts like adjoint functors and the general limit concept162.

Exact Sequence Spectral Sequence Abelian Variable Category Theory Algebraic Topology
These keywords were added by machine and not by the authors. This process is experimental and the keywords may be updated as the learning algorithm improves.

Notice that I stress the use of these concepts, not the need to use them. I am interested in the pragmatic aspect here, not in proof-theoretical analysis.