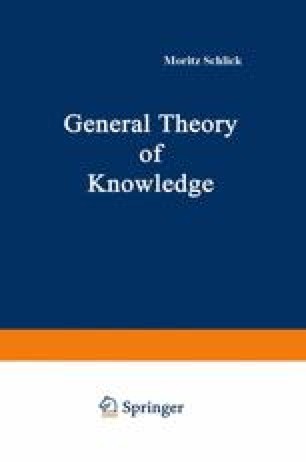 Although logic from the beginning was able to perceive the above-mentioned problem, the impetus for its definitive solution came from another quarter. It came from research in a particular science, to whose needs logic, in this instance as in most others, did not adapt itself until later. In the nature of the case, the only science that could forge ahead to a rigorous formulation of our problem was one so constituted that absolute certainty had to be guaranteed for its every step. This science was mathematics. The remaining sciences, not only because of inadequate definitions but on other grounds as well, were unable to raise such lofty claims to rigor; hence they had no occasion to formulate their problems in so basic a manner. Nevertheless, the significance of the studies we are about to report is by no means confined to mathematics. On the contrary, they are in principle just as valid for scientific concepts generally as they are for those of mathematics. It is simply a matter of convenience that we take mathematical concepts as a paradigm on which to base our considerations.

Mutual Relation Intuitive Idea Absolute Certainty Intuitive Meaning Rigorous Formulation
These keywords were added by machine and not by the authors. This process is experimental and the keywords may be updated as the learning algorithm improves.
This is a preview of subscription content, log in to check access.