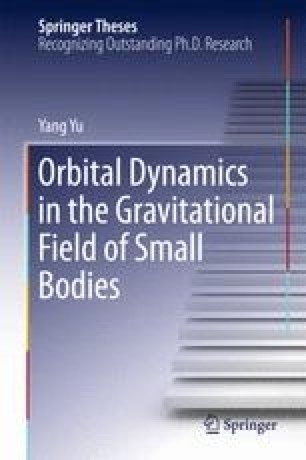 Natural Motion Near the Surface of Small Bodies

Observations have shown that most small bodies of diameters larger than 300 m are covered by regolith materials, i.e. an active layer of loose unconsolidated rocks and dust, which has been shaped by various space weathering effects. Thus, a detailed look at the grains’ dynamics is apparently important and necessary for the understanding of above processes. The ejecta from a meteorite impact may experience different evolutional histories and end up with different fates. Differing from around planets, the orbital motion and surface motion around a small body are not clearly demarcated, because: first, the gravity from a small body is usually weak, and the minimum launch speed could be easily reached each by a natural grain on the surface; second, small bodies have no atmosphere, i.e., once an object lifts from the surface, it is counted as orbital motion. This chapter presents our method to model the migration of individual grain on asteroid’s surface. In Sect. 6.2, a global valid method for gravitational filed calculation is developed; Sect. 6.3 proposes an event-driven model to implement full simulation of an individual particle moving over the surface of an asteroid; Sect. 6.4 includes basic tests as verification to the model proposed; Sect. 6.5 demonstrates a possible application of our method, to explore the surface mechanical environment of a specified asteroid 1620 Geographos, and to find out the connections between the local geological features and the dynamical behaviours of the test particle.