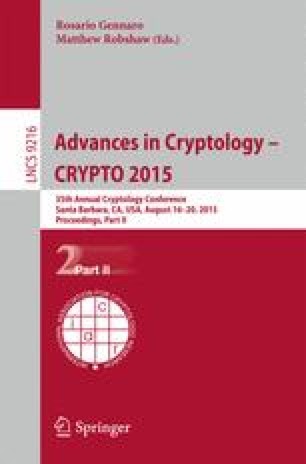 Structure-preserving Signatures (SPS) Generic Group Model Public Key Random Message Attacks Pairing Product Equations
These keywords were added by machine and not by the authors. This process is experimental and the keywords may be updated as the learning algorithm improves.

Structure-preserving signatures (SPS) [4] are pairing-based signatures where all the messages, signatures and public keys are group elements, verified by testing equality of products of pairings of group elements. They are useful building blocks in modular design of cryptographic protocols, in particular in combination with non-interactive zero-knowledge (NIZK) proofs for algebraic relations in a group [29]. Structure-preserving signatures have found numerous applications in public-key cryptography, such as blind signatures [4, 25], group signatures [4, 25, 27, 28, 40], homomorphic signatures [38], delegatable anonymous credentials [11, 24], compact verifiable shuffles [18], network encoding [9], oblivious transfer [26] and e-cash [13].

A systematic treatment of structure-preserving signatures was initiated by Abe et al. in 2010 [4], building upon previous constructions in [17, 26, 27]. In the past few years, substantial and rapid progress were made in our understanding of the construction of structure-preserving signatures, yielding both efficient schemes under standard assumptions [2, 3, 4, 30] as well as “optimal” schemes in the generic group model with matching upper and lower bounds on the efficiency of the schemes [5, 6, 7, 8, 10]. The three important measures of efficiency in structure-preserving signatures are (i) signature size, (ii) public key size (also per-user public key size for applications like delegatable credentials where we need to sign user public keys), and (iii) number of pairing equations during verification, which in turn affects the efficiency of the NIZK proofs.

One of the main advantages of designing cryptographic protocols starting from structure-preserving signatures is that we can obtain efficient protocols that are secure under standard cryptographic assumptions without the use of random oracles. Ideally, we want to build efficient SPS based on the well-understood k-Lin assumption, which can then be used in conjunction with Groth-Sahai proofs [29] to derive protocols based on the same assumption. In contrast, if we start with SPS that are only secure in the generic group model, then the ensuing protocols would also only be secure in the generic group model, which offer little theoretical or practical benefits over alternative – and typically more efficient and pairing-free – solutions in the random oracle model.

Unfortunately, there is still a big efficiency gap between existing constructions of structure-preserving signatures from the k-Lin assumption and the optimal schemes in the generic group model. For instance, to sign a single group element, the best construction under the SXDH (1-Lin) assumption contains 11 and 21 group elements in the signature and the public key [2], whereas the best construction in the generic group model contains 3 and 3 elements (moreover, this is “tight”) [5]. The goal of this work is to bridge this gap.

We present clean, simple, and improved constructions of structure-preserving signatures via a conceptually novel approach. Our constructions are secure under the k-Lin assumption; under the SXDH assumption (i.e., \(k=1\)), we achieve 7 group elements in the signature.

Previous constructions use fairly distinct techniques, resulting in a large family of schemes with incomparable efficiency and security guarantees. We obtain a family of schemes that simultaneously match – and in many settings, improve upon – the efficiency, assumptions, and security guarantees of all of the previous constructions. Figure 1 summarizes the efficiency of our constructions. (The work of [41] is independent and concurrent.) Our schemes are fully explicit and simple to describe. Furthermore, our schemes have a natural derivation from a symmetric-key setting, and the derivation even extends to a modular and intuitive proof of security.

At a high level, our constructions and techniques borrow heavily from the recent work of Kiltz and Wee [36] which addresses a different problem of constructing pairing-based non-interactive zero-knowledge arguments [29, 33]. We exploit recent developments in obtaining adaptively secure identity-based encryption (IBE) schemes, notably the use of pairing groups to “compile” a symmetric-key primitive into an asymmetric-key primitive [14, 19, 44], and the dual system encryption methodology for achieving adaptive security against unbounded collusions [37, 43]. Along the way, we have to overcome a new technical hurdle which is specific to structure-preserving cryptography.

1.2 Our Approach: SPS from MACs

produced by an efficient adversary,
Open image in new window

At this point, we can then embed \(\tau \in \mathbb {Z}_q\) as a group element as described earlier. Our constructions may also be viewed as instantiating the above paradigm with the state-of-the-art LHSPS in [36].

Optimality. The linearity in the verification equation of SPS poses severe restrictions on the efficiency of such constructions. In both Type I and III bilinear groups, it was proved in [5, 8] that any fully secure SPS requires at least 2 verification equations, at least 3 group elements, the 3 elements not all the same group (for Type III asymmetric pairings).In fact, [5] shows the above lower bounds by giving attacks the weaker security model of unforgeability against two random message queries. Furthermore, one-time secure SPS against random message attack (\(\mathsf {RMA}\)) in Type I bilinear groups require at least 2 group elements and 2 equations [8].Furthermore, SPSs in Type III bilinear groups require at least 4 group elements [6] for unforgeability against adaptive chosen message attack under non-interactive assumptions (such as k-Lin).

Comparison with Previous Approaches. The prior works of Abe, et al. [2, 3] presented two generic approaches for constructing SPS from SXDH and 2-Lin assumptions: both constructions combine a structure-preserving one-time signature and random-message secure signatures ala [23], with slightly different syntax and security notions for the two underlying building blocks; the final signature is the concatenation of the two underlying signatures. Our construction has a similar flavor in that we combine a one-time MAC with a randomized PRF. However, we are able to exploit the common structure in both building blocks to compress the output; interestingly, working with the matrix Diffie-Hellman framework [22] makes it easier to identity such common structure. In particular, the output length of the randomized MAC with unbounded security is that of the PRF and not the sum of the output lengths of the one-time MAC and the PRF; this is akin to combining a one-time signature and a random-message secure signature in such a way that the combined signature size is that of the latter rather than the sum of the two.

Signatures from IBE. While our construction of signatures exploits techniques from the literature on IBE, it is quite different from the well-known Naor’s derivation of a signature scheme from an IBE. There, the signature on a message \(m \in \mathbb {Z}_q\) corresponds to an IBE secret key for the identity m. This approach seems to inherently fail for structure-preserving signatures as all known pairings-based IBE schemes need to treat the identity as a scalar. In our construction, a signature on \([\mathbf {m}]_1\) also corresponds to an IBE secret key: the message vector (specifically, a one-time MAC applied to the message vector) is embedded into the master secret key component of an IBE, and a fresh random tag \(\tau \in \mathbb {Z}_q\) is chosen and used as the identity. The idea of embedding \([\mathbf {m}]_1\) into the master secret key component of an IBE also appeared in earlier constructions of linearly homomorphic structure-preserving schemes [36, 38, 39]; a crucial difference is that these prior constructions allow the use of a scalar tag in the signature.

Towards Shorter SPS? One promising approach to get even shorter SPS against adaptive chosen message attack by using our approach is to improve upon the underlying MAC in the computational core lemma (Lemma 3). Currently, the MAC achieves security against chosen message attacks, whereas it suffices to use one that is secure against random message attacks. Saving one group element in this MAC would likely yield a saving of two group elements in the SPS, which would in turn yield a SXDH-based signature with 5 group elements. Note that the state-of-the-art standard signature from SXDH contains 4 group elements [20]. Together with existing lower bounds for SPS, this indicates a barrier of 5 group elements for SXDH-based SPS; breaking this barrier would likely require improving upon the best standard signatures from SXDH.

Let \(\mathsf {par}\) be some parameters that contain a pairing group \(\mathcal {PG}\). In a structure-preserving signature (SPS) [4], both the messages and signatures are group elements, verification proceeds via a pairing-product equation.

We will exploit the following lemma in the analysis of our scheme. Informally, the lemma says that \(\mathbf {m}\mapsto (1,\mathbf {m}^{\!\scriptscriptstyle {\top }})\mathbf {K}\) is a secure information-theoretic one-time MAC even if the adversary first sees \((\mathbf {A},\mathbf {K}\mathbf {A})\).

We present a variant of the computational core lemma from [36, Lemma 3].

For completeness, a formal proof of the lemma is given in [35].

\(\mathsf {RMA}\)-security states that it is hard for an adversary to forge a signature even if he sees many signatures on randomly chosen messages. The security is formally defined as follows:

We thank Olivier Blazy and Georg Fuchsbauer for helpful discussions.