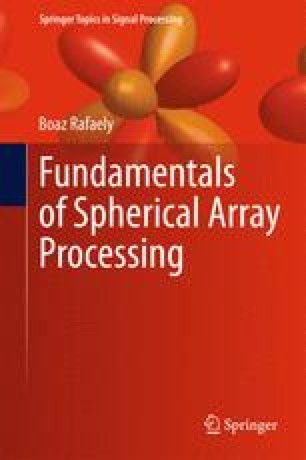 Spherical microphone arrays are realized by placing microphones in three-dimensional space and recording the signals at the microphone locations. When the microphones are placed on the surface of a sphere, they sample the sound pressure at the sphere surface. Estimation of the sound pressure function on the measurement sphere may depend on the sampling configuration and, therefore, methods for sampling functions on the sphere, such as equal-angle sampling, sampling, uniform sampling, presented in this chapter. An important feature of the sampling methods is their capacity to facilitate computation of the spherical Fourier transform of the function on the sphere in the case of order-limited functions. When this capacity is not fully achieved, sampling errors occur and the function cannot be reconstructed from its samples. The sampling methods mentioned above have closed-form expressions for computing the spherical harmonic coefficients from the samples, using a summation rather than integration. Computation of the spherical harmonic coefficients can also be realized for arbitrary sampling configurations, using an inversion of the sampled spherical harmonics matrix, as detailed in this chapter. The methods presented here will provide the basis for selecting microphone locations in the process of spherical microphone array design.