An Introductory Study on China's Cultural Transformation in Recent Times 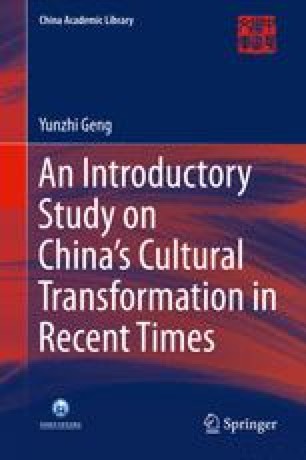 Rise of the New Culture Movement

Successive years of turmoil and the chaos in intellectual circles after the founding of the National Republic made forward-looking persons start to rethink things more profoundly. Countless deaths and untold bloodshed at the end of the Qing Dynasty had prompted a change in the designation of the state power but failed to bring about a new social order, and the nation’s internal and external troubles kept multiplying. In the spring of 1915, the Japanese imperialists who had consistently cherished designs of invading China raised their iniquitous Twenty-One Demands. The news infuriated the nation and accelerated the awakening of China’s forward-looking persons. They realized that no reliance could be placed either on the government or the governance of the times, and one had to turn to the people if China’s independence were to be safeguarded and the country were to be made strong and prosperous. Meanwhile, the constitutional and revolutionary movements toward the end of the Qing Dynasty had aimed at setting up a democratic system, but since the people had not awakened and no foundation for a democratic system had been laid in Chinese society, the reality of a democratic system remained as remote as ever even though the designation of the state’s regime had changed. As Chen Duxiu put it, “we have suffered even more grievously from autocracy under the republican state system”. Hence, forward-looking persons gradually came to a common understanding: They should strive to change people’s ideological concepts, so that every person might understand his or her responsibilities and rights as an individual and a citizen; so that every person might be emancipated from the existing bonds of autocracy, patriarchy and the family clan, and so that every person should fulfill his or her duties and rights in the awareness of being his or her own master. Only thus would it be possible to lay the foundations for a new society and a new system. Based on this understanding, some forward-looking persons resolved to start by bringing changes to the ideological culture and by initiating a grand project whereby “the first-awakened arouse the later-awakened.” A certain basis for this new ideological and cultural enlightenment had already been prepared in the final years of the Qing Dynasty through the efforts of progressive personages to introduce new thinking and culture from the West and to criticize some of China’s old traditions. To these were now added the participation of growing numbers of intellectual elites who had systematically obtained a new education in and outside China. And thus arose the most ebullient, longest-lasting, broadest, and most influential cultural movement in China’s history, one that served as a major pivot in modern China’s cultural transformation—the New Culture Movement.

Young People Qing Dynasty Filial Piety Mass Organization Culture Movement
These keywords were added by machine and not by the authors. This process is experimental and the keywords may be updated as the learning algorithm improves.
This is a preview of subscription content, log in to check access.