Growing up in the Kibbutz 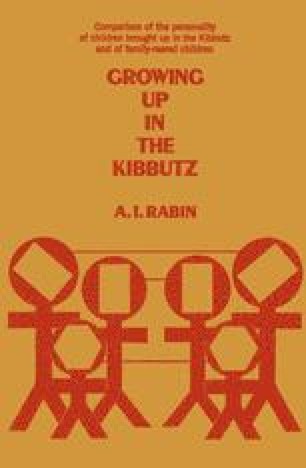 In the previous chapter we noted that the Kibbutz children have made notable advances during the years between infancy and preadolescence—advances in intellectual development and personality maturity which placed them in a fairly favorable position when compared with non-Kibbutz children of similar age. The important question that arises is whether such changes are transitory or whether they persist through later years and presage adolescent and adult development and status. Are the gains made by the growing Kibbutz children maintained and consolidated—are they able to hold their own in later years? To answer this question we have studied groups of seniors in the secondary school systems: 30 Kibbutz adolescents and 25 non-Kibbutz adolescents, of both sexes, with an average chronological age of about seventeen and one-half years. They represent several Kibbutzim and several ordinary villages.

Drive Control Incomplete Sentence Egocentric Orientation Close Physical Contact Secondary School System
These keywords were added by machine and not by the authors. This process is experimental and the keywords may be updated as the learning algorithm improves.
This is a preview of subscription content, log in to check access.