Novel Chemotherapeutic Agents: Preactivation in the Treatment of Cancer and AIDS 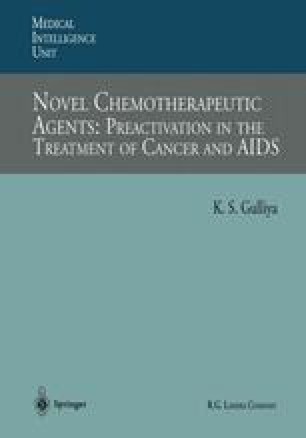 Novel Chemotherapeutic Agents: Preactivation in the Treatment of Cancer and AIDS pp 203-207 | Cite as

It is our wish that this book may become a contribution to the pedagogy of photobiology as well as new drug development. By way of concluding thoughts on preactivation, even at the risk of being redundant, I would like to summarize the salient points of this technology obtained to date. However, before proceeding with these points, I want to document a recollection of my first pleasant and uplifting experience that occurred soon after the discovery of preactivation during a site visit from NIH. After our presentation of the data on preactivation, Dr. Charles R. Smart, then Chief of Early Detection Branch at NCI, who, incidentally, was not a member of the site visit team, pulled me aside and said, “There are three things I want you to remember, 1) I consider this discovery a ‘breakthrough’ in the field; 2) it will not be easy but do not give up on it; and 3) the slides you have shown today, do not use them ever again because of their poor readability.” In many ways Dr. Smart’s comments have been a driving force for me. Needless to say, those slides, prepared in haste for the site visit, were promptly discarded and I have not yet given up on the discovery and development of preactivation technology. It is because of this discovery that a major limitation of photodynamic therapy, i.e. its dependence on light, has been eliminated for the first time in its over 90 years of documented history.The process of preactivation generates previously unknown chemotherapeutic agents that are not only effective against malignancies and viral infections but also easily tolerated. The mechanism of the formation of new agents is due to the reaction of singlet oxygen generated at excited states with the photoactive compound itself. As a result, the long held but completely unproven belief that singlet oxygen generated at excited states is the sole cause of cell kill, a cornerstone of photodynamic therapy, has been proven incorrect. It is interesting to note that while it is well established that singlet oxygen reacts indiscriminately with whatever happens to be around, the idea of its reaction with the compounds from which it is generated seems to annoy many in the field of photodynamic therapy. Even if I agree for a moment with the nay sayers, it is highly illogical that singlet oxygen would selectively spare the compound from which it was generated but react with everything else in sight. It is a physical impossibility given the nature of the beast. I think that proponents of this belief, perhaps for territorial reasons to keep photodynamic therapy apart from chemotherapy, have been successful only in keeping the photo chemotherapy from the main stream of clinical modalities. In fact, data presented here as well as data from numerous published reports indicate that at the molecular level the only difference between photo chemotherapy and chemotherapy is the use of chemical reaction-triggering photons. All subsequent reactions are very similar to most conventional chemotherapeutic agents such as adriamycin which is, for example, also known to produce in situ reactive oxygen species. Even though “...history is replete with accounts of discoveries usually met with rebuff and denial”*, all is not lost because many visionary scientists have already confirmed that pre-illumination or preactivation of photoactive compounds leads to the generation of new photo-products, as described in chapter 2.

Singlet Oxygen Photodynamic Therapy Site Visit Poor Readability Clinical Modality
These keywords were added by machine and not by the authors. This process is experimental and the keywords may be updated as the learning algorithm improves.

Men with sore eyes.... find the light painful, while darkness, which permits them to see nothing, is restful and agreeable.—Dio Chrysostom (40?–115?) Eleventh (Trojan) Discourse, II (tr. by J. W Cohoon)