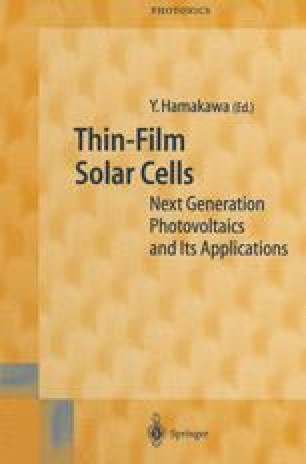 The Japanese Photovoltaic Power Generation Technology Development Program (so called “Sunshine Program”) was started immediately after the first oil crisis in 1973. Since that time, the meaning of PV technology has been changed from the generation of small-scale electrical energy to the development of bulk electrical power as an alternative to oil and to contribute to the suppression of global warming. As a result of having continuous R&D efforts on the technological development with market expansion aid by the government subsidies, Japanese PV industries have now started to work on self-development. In fact, the PV market in Japan has expanded markedly in recent years in the fields not only of the residential rooftop PV, but also other large-scale PV plants, such as public buildings and so on.

Solar Cell Subsidy Program Technology Development Program Photovoltaic Technology Energy Working Group
These keywords were added by machine and not by the authors. This process is experimental and the keywords may be updated as the learning algorithm improves.
This is a preview of subscription content, log in to check access.