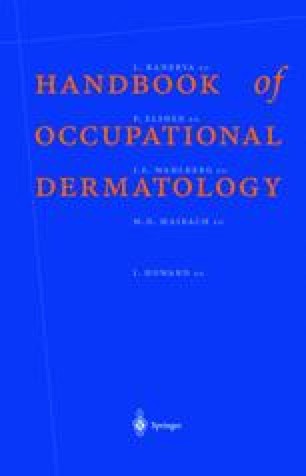 Occupational marks represent the effects of a particular occupation on a worker’s skin. They are usually calluses or corns that develop in locations subjected to repeated friction, pressure, or other trauma, and include discolorations, telangiectases, tattoos, odors, deformities, and other changes. In some occupations, the marks may be quite variable, as with musicians (Harvell and Maibach 1992). Corresponding marks may be seen in athletes (Kanerva 1998). Such marks were common previously among workers and served to identify many occupations. Today, with increasing automation, less frequent manual operation of tools, better protective clothing, and a shorter work week, occupational marks have become less frequent. They have almost disappeared from many industries, but can probably still be found in less industrialized countries.

Mechanical Trauma Short Work Friction Friction Nail Dystrophy Ground Friction
These keywords were added by machine and not by the authors. This process is experimental and the keywords may be updated as the learning algorithm improves.
This is a preview of subscription content, log in to check access.