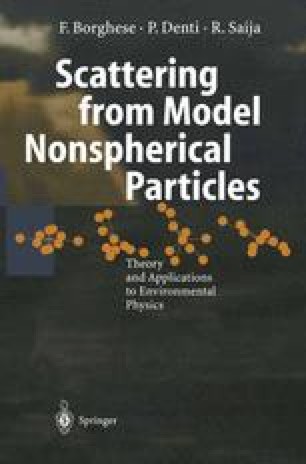 The propagation of an electromagnetic wave through an assembly of particles embedded within a homogeneous matrix is known to depend, to a large extent, both on the distribution and on the specific features of the particles themselves. The simplest case is that of a plane wave that impinges on a particle. As a result of the field-particle interaction, the incident wave undergoes extinction, i.e., a detector along the path of the wave records a smaller intensity than would be recorded in the absence of the particle. Extinction itself, however, is the result of two concurrent processes: the particle, on one hand, absorbs and, on the other hand, scatters the impinging radiation. The absorption process implies the transformation of the electromagnetic energy into some other form, in general heat. This can be accounted for by attributing to the particle a complex index of refraction whose choice falls into the realm of the solid state physics and will not be further discussed here. In turn, the scattering process can be roughly described by stating that the incident field excites the particle to emit a wave that at a large distance looks like a more or less spherical outgoing wave superposed to the original incident field. The whole process is uniquely determined by the boundary conditions that the components of the field must satisfy across the surface of the particle and at infinity.

Vector Field Helmholtz Equation Transformation Property Addition Theorem Angular Momentum Operator
These keywords were added by machine and not by the authors. This process is experimental and the keywords may be updated as the learning algorithm improves.
This is a preview of subscription content, log in to check access.