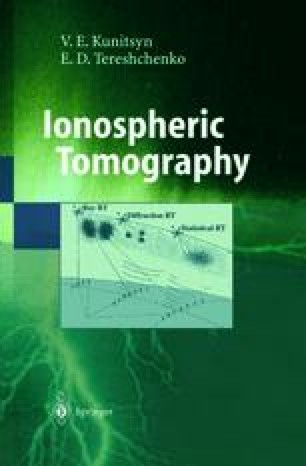 Ionosphere: Structure and Basic Methods for Radio Sounding and Monitoring

The term “ionosphere” for defining the ionized shells encircling Earth was introduced by V. Watt in 1929. The hypothesis that a conducting region should exist in the upper atmosphere was first advanced at the end of the nineteenth century first by B. Stewart and then by A. Schuster [Schuster, 1889] to explain diurnal variations of the geomagnetic field. However, this hypothesis became widespread only after Heaviside and Kennely explained in 1902 the propagation of radio waves over large distances. The existence of ionized regions in the upper atmosphere was directly proved in the 1920s. Of greatest importance was the invention of the pulse ionospheric station by G. Breit and M. Tuve [Breit and Tuve, 1926], who were the first to carry out radio probing of the ionosphere. In Russia, the first results in this field were obtained by M.V. Shuleykin [Shuleykin, 1923] who inferred from studying the operation of broadcasting stations that a radio wave exists that comes from above to Earth’s surface. He calculated the reflection height as 260 km.

Radio Wave Scattered Field Ionospheric Plasma Electron Density Profile Incoherent Scatter
These keywords were added by machine and not by the authors. This process is experimental and the keywords may be updated as the learning algorithm improves.
This is a preview of subscription content, log in to check access.