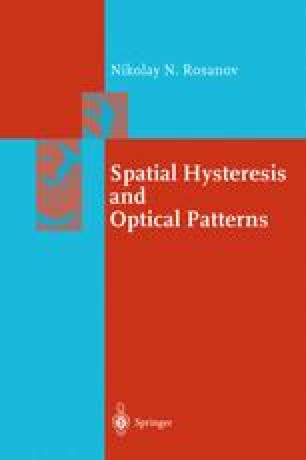 Considered in the present chapter are the regimes of the hybrid bistable scheme, which is an electro-optic modulator in which a part of the power of the transmitted radiation is transformed into an electric voltage which is applied then through the feedback circuit to the electro-optic crystal. The transverse distributivity is not essential in this scheme, and the longitudinal one shows itself in the form of a delay. Neglecting the response (relaxation) time in the feedback circuit, the kinetics of the scheme is described by one-dimensional point mapping, which connects the system characteristics in a time interval equal to the delay time. Then, at a constant power of incident radiation and with an absence of noise, stationary, periodic (with the period being a multiple of the delay time) and dynamically chaotic regimes form depending on the parameters and initial conditions of the scheme. A finite response time leads to a shift of stability boundaries for these regimes, to an increase in the modulation period, and, for the chaotic regimes, to a breakdown of the output radiation into pulses with a duration of the order of the response time.

Stationary Regime Strange Attractor Stability Domain Period Doubling Iteration Function
These keywords were added by machine and not by the authors. This process is experimental and the keywords may be updated as the learning algorithm improves.
This is a preview of subscription content, log in to check access.