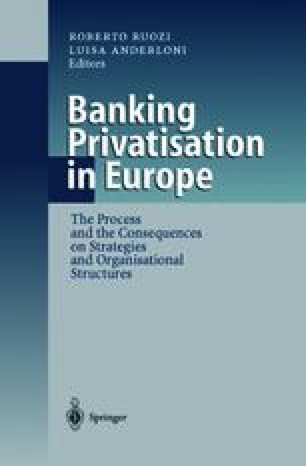 This case describes the privatisation of Argentaria, one of Spain’s largest banking groups. In order to analyse the true scope of the operation and the events leading up to it, we will begin by describing the Spanish banking system, adaptation of the public bank to EC directives and conclude by analysing Argentaria’s initial share prices and comparing them with the average PER for other bank shares. The high discount rates offered by Argentaria at the outset can be at least partly explained by the IPO (Initial Public Offering), although there are certain other economic and political factors which, as will be seen later on in this paper, might provide some clues to the differences between Argentaria share performance and that of other bank shares.

Stock Exchange Institutional Investor Initial Public Offering Share Price Saving Bank
These keywords were added by machine and not by the authors. This process is experimental and the keywords may be updated as the learning algorithm improves.
This is a preview of subscription content, log in to check access.