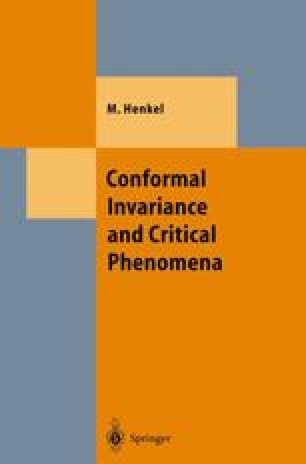 The Hamiltonian Limit and Universality

We have already discussed in Chap. 1 the close analogy between statistical mechanics and field theory. Reinterpreting the transfer matrix as an Euclidean time evolution operator, we were led to define a corresponding quantum Hamiltonian. While in general, this will have a rather complicated form, there is a limit procedure, called the Hamiltonian limit, to simplify the structure of the transfer matrix considerably without affecting the universal properties of the critical behaviour under study [582, 242] . As compared to the isotropic transfer matrix, the resulting quantum Hamiltonian is much sparser, which is useful for numerical investigations. The quantum Hamiltonian contains the information about the universal critical behaviour in condensed form. To illustrate this, we show that for the Ising spin system and for the scalar φ4 field theory, which are in the same universality class, the same quantum Hamiltonian is obtained. For reviews, see [411, 312] .