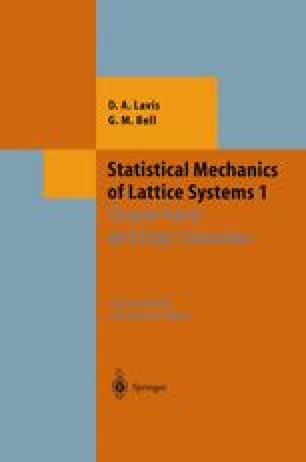 Cluster variation methods are closed-form approximations which, unlike the mean-field method, make some allowance for short-range order effects.1 In first-order approximations, energies and weights for the microsystems on a cluster or group of sites are treated exactly, but the correlations due to sites shared between groups are handled by plausible assumptions. Equivalent versions were invented independently by various authors, notably Guggenheim (1935), (the quasi-chemical method), Bethe (1935), (the Bethe method) and Kasteleyn and van Kranendonk (1956a, 1956b, 1956c), (the constant-coupling method). We base our approach on a first-order method due to Guggenheim and McGlashan (1951) which allows any suitable group of sites to be used and enables quite complicated forms of ordering and intermolecular attraction to be incorporated in a natural way. For the particular problem of sublattice ordering, a similar method had been used by Yang (1945) and Li (1949). Kikuchi (1951) carried the process of approximation to a higher level by minimizing the free energy with respect to the occupation probabilities of subgroups of sites, including nearest-neighbour pairs, as well as those of the main group and this procedure was placed on a systematic basis by Hijmans and de Boer (1955, 1956) (see also Domb 1960, Burley 1972, Ziman 1979, Young 1981, Schlijper 1983 and Morita 1984). The cluster counting procedures used by Hijmans and de Boer (1955) have now been used in the finite-lattice series expansion method of de Neef and Enting (1977) (see Volume 2, Sect. 7.7).

Ising Model Free Energy Density Cayley Tree Tricritical Point Bethe Lattice
These keywords were added by machine and not by the authors. This process is experimental and the keywords may be updated as the learning algorithm improves.
This is a preview of subscription content, log in to check access.