Creation and Transfer of Knowledge 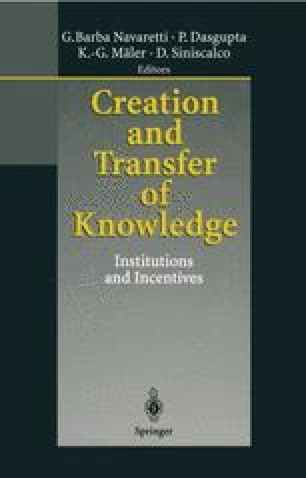 Communication Norms and the Collective Cognitive Performance of “Invisible Colleges”

Scientific research communities may be studied as social networks within which ideas or statements circulate, acquire validity as reliable knowledge, and are recombined to generate further new ideas. Social networks also form the locus for the transmission of tacit knowledge and skills requisite to the interpretation and operationalization of scientific statements. These extensive, yet informal structures of inter-personal knowledge-transactions have been referred to as constituting “invisible colleges”. This paper develops an abstract and highly stylized account of the communications structure of an invisible college, and examines its collective epistemological performance by employing concepts and results from Markov random field theory.

Social Network Tacit Knowledge Local Network Markov Random Field Scientific Statement
These keywords were added by machine and not by the authors. This process is experimental and the keywords may be updated as the learning algorithm improves.

The development of this paper was encouraged initially by the comments of Patrick Cohendet and other participants at his CNET Workshop on the Economics of Networks, in Paris on 20th April 1995, where I described some very preliminary results. My stochastic formulation of the role of communications networks in science has benefited immeasurably from previous collaborative projects with Dominique Foray and Jean-Michel Dalle, applying Markov random field models in other contexts. The present version draws on material subsequently developed for a paper with Tom Flemming that was presented to the International Conference on Creation and Transfer of Knowledge: Institutions and Incentives, held in Castelgandolfo (Rome), 21–23 September 1995. Manuel Trajtenberg’s insightful discussion, and the remarks of Adam Jaffe, Giorgio Navaretti, Jacques Thisse, and others on that occasion, have contributed substantially to improving the exposition. Elizabeth Johansson also helped, by diverting her time from more exciting activities to supply the answer to an applied probability problem required for the argument of section 4.2. I gratefully record, too, the probing questions and suggestions made by Albert Bolink, Sajeev Goyal, and Uskali Maki and others at the Economics and Philosophy of Science Seminar at Erasmus University, Rotterdam (13 November 1995); and the comments of Patrick Bolton and other participants of the Economic Theory Seminar of CENTER at the University of Tilburg (12 March 1996). Olivier Favereau’s close critical discussion of the next draft of the paper, presented at the IMRI Workshop of the University of Paris-Dauphine (11 April 1996), contributed materially to its further improvement; so, too, did my conversations with Kenneth Arrow, Arie Rip, and other participants in meetings of the Seminar on the Economics of Information Diffusion convened at All Souls College, Oxford, during Trinity Term 1996. I take this occasion also to express my gratitude for the support that my work on the economics of science has received from the Renaissance Trust (UK). Those whose generous assistance has contributed to this paper must be fully exonerated from blame for such deficiencies as have persisted in the face of their best corrective efforts.