Elementary Particles and Their Interactions 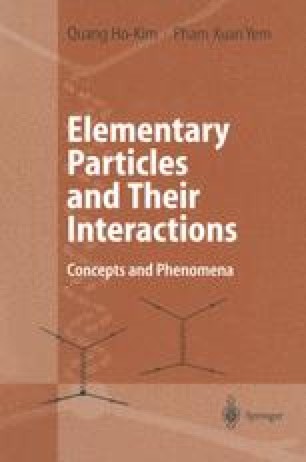 Elementary Particles and Their Interactions pp 305-342 | Cite as

The Standard Model of the Electroweak Interaction

In this chapter we describe the unified theory of weak and electromagnetic interactions that is often referred to as ‘the standard model’ (of the electroweak interaction). It is a non-Abelian gauge theory in which the local phase invariance is hidden, or spontaneously broken, so that the weak gauge forces may acquire a finite range as experimentally observed without sacrificing the renormalizability expected of a physically meaningful theory. We shall first review the developments that have led to the formulation of the current theory. We next describe in some detail the model of the electron and its neutrino, including the identification of the gauge symmetry group, its subsequent spontaneous breaking and the attendant mass generation for the electron and the gauge bosons. Introducing one family of quarks into the model poses no particular problem of principle, but when several families of leptons and quarks enter, extra care must be taken to distinguish between the gauge eigenstates and the mass eigenstates in the fermion sector, which gives rise to several novel and powerful predictions by the theory.

Introduction of the charmed quark