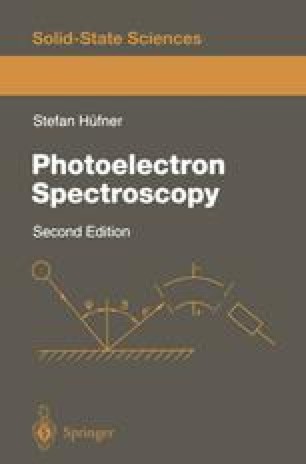 So far in this volume, we have neglected a seemingly obvious effect in PES, namely the scattering of the photoexcited electron on its way through the crystal to the surface, by the crystal potential. This is a straightforward scattering problem leading to intensity modulations as a function of electron wavelength and/or crystal orientation. Such intensity modulations have indeed been observed and the method of measuring PES in order to bring out most clearly the scattering features of the final-state electron intensity is called PhotoElectron Diffraction (PED).

Polar Angle Forward Scattering EXAFS Data Bulk Plasmon Photoelectron Diffraction
These keywords were added by machine and not by the authors. This process is experimental and the keywords may be updated as the learning algorithm improves.
This is a preview of subscription content, log in to check access.