The Creation of the Extraordinary 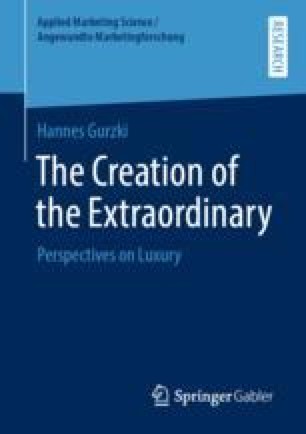 Perspectives on Luxury: An Integrative Model

What is luxury? This question is a fundamental question for research and yet the only agreement reached is that its answer remains unclear (cf. Bastien and Kapferer, 2013, Brun and Castelli, 2013, Godey et al., 2013, Roper et al., 2013, Wiedmann et al., 2009). Terms such as prestige (for example, Vigneron and Johnson, 1999), conspicuous consumption (for example, Wang and Griskevicius, 2014), and status consumption (for example, Eastman et al., 1999, Shukla, 2010) have all been used when discussing luxury. Furthermore, terms have often not been defined precisely and have been used synonymously or inconsistently in practice and in the studies (Brun and Castelli, 2013, Dubois and Czellar, 2002, Vigneron and Johnson, 2004, Vigneron and Johnson, 1999). Thus, a theoretical clarification is needed to understand more clearly the central characteristics of the luxury concept.