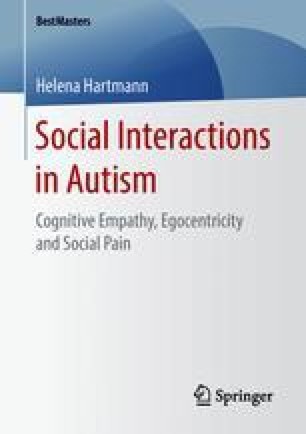 Empathy and its distinct affective and cognitive components have been widely studied in both neurotypical as well as specific psychiatric populations (Decety, 2015; Lamm et al., 2016). Several previous studies have shown that the cognitive component of empathy – encompassing concepts like perspective taking, mentalizing and theory of mind – seems to be qualitatively different, or even disrupted, in Autism-Spectrum-Disorder (ASD; Bird & Viding, 2014; Lockwood, 2016; Lockwood et al., 2013). In this context, the ability for self-other distinction (SOD) plays a crucial role in empathic processing, mainly to avoid personal distress and confusion, when one is confronted with various and changing emotional states of other people that do not necessarily always match one’s own.