The Quest for Good Urban Governance 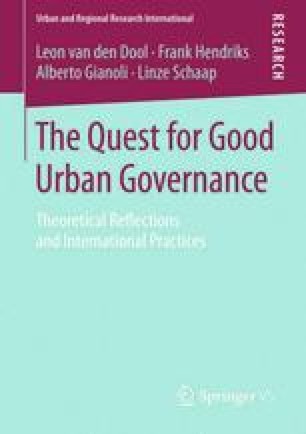 This volume started off with a discussion of governance, good governance, and good urban governance. We defined the concept of “urban governance” as the more or less institutionalized working arrangements that shape organizing capacities and countervailing powers in polycentric urban settings defined by interconnected governmental and societal actors. In this definition, we deliberately added the “countervailing powers” element. Contemporary literature on urban governance tends to focus on productive capacity, as, for example, the urban regime approach by Stone does (1989). Organizing corrective capacity, the very issue of how checks and balances and countervailing powers play a role, remains rather underrepresented, although some rare authors criticize the somewhat one-sided attention devoted to production and growth issues in governance literature (e.g., Moss Kanter 2000; Pierre 2011).

Civil Society Good Governance Direct Democracy Policy Learning Governance Reform
These keywords were added by machine and not by the authors. This process is experimental and the keywords may be updated as the learning algorithm improves.
This is a preview of subscription content, log in to check access.