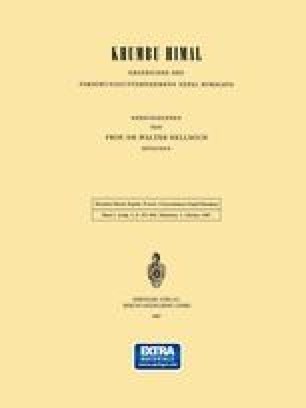 The Himalaya system intersects various climatic belts along the approximately 1900 miles of its length. To the south-east, in Assam and Bengal as far as Bhutan, the lowlands are covered by tropical rain-forests, further west, in Sikkim and Nepal, by humid monsoon forests (Sal-forest), from west Nepal to Sutlej by drier, semihumid monsoon forests, in Pandjab by subtropical, semia-rid shrub steppes. In the extreme north-west, in Ladak, Karakorum, Gilgit and Chusistan, the alpine heights rise from the floors of desert-like valleys. Thus, the arid belt of Central Asia extends over the Himalayan range in the north-west into the southern forelands, whereas in the extreme south-east, in the Tsangpo region, the humid forests cross the mountain region to penetrate south Tibet. In the longest, central section from the Chenab Valley as far as Subansiri, the main chain of the range forms a fairly sharp dividing-line between the humid region to the south which lies under the influence of the summer monsoon and the northern flank in Tibet. In accordance with these horizontal climatic zones, the entire Himalaya system falls into the following natural divisions: the Tsangpo Himalaya, the Assam Himalaya, the Sikkim-east Nepal Himalaya, west Nepal-Garhwal Himalaya, Pandjab Himalaya, Indus Himalaya, and the Tibetan Himalaya, to which may be added the so-called Trans-Himalaya situated north of the great trough formed by the Indus and the Tsangpo valleys (cf. map).

A distinct vertical gradation of both climate and vegetation corresponds to each of these regions (cf. fig. 5 p. 360). The combination of this horizontal and vertical gradation gives rise to the three-dimensional disposition of all climate-conditioned phenomena: vegetation, soil types, natural landscapes, land and forest ecological conditions.

Further differentiation can be traced back to the influences of the orographic-topographic arrangement of the mountain range on the climate (mesoclimate, topoclimate, and local, terrain-conditioned or subregional climate). A first effect of this kind is to be seen in the difference between the free-lying mountain slopes and the deeply incised transsection valleys. This can give rise through the daily interchange of air between the low-lying plain and the Tibetan alpine plateau (compensation currents) to a system of mountain-, valley- and slope-winds which produce a dry climate and xerophilous vegetation on the floor of the valleys. Of great importance, too, is the exposure of the mountain slopes to the rays of the sun. The effect of this is so pronounced in the Indus Himalaya and in south-east Tibet that the humid forest, bush and shrub formations only flourish on the shaded slopes with a northerly aspect, while on those with a southerly aspect the steppes of the lower regions merge into the high-altitude alpine steppes. This is to be explained by the particularly small share diffuse radiation has in the total radiation between the latitudes of 20 – 40° at altitudes above some 2000 m and in the high proportion of summer radiation enjoyed in these latitudes, a factor which obtains particular significance at greater heights where there is a long winter covering of snow.

The snow avalanches here have a further genuinely topoclimatic effect. The accumulation of snow in the avalanche lanes and at their mouths in the valley shorten the vegetation period so drastically in some cases that a complete inversion of the vegetation gradation according to altitude arises.

The variations of the plant cover within small areas are to be accounted for by the subsoil, its composition and forms (edaphic factors). Among the factors important in this respect are the parent rock, the soil profile produced by weathering, the groundwater, and the soil climate. But the plant cover also effects the edaphic factors in its turn, too. It transforms the “macroclimate” to the “micro”-climate near the ground; it has a determining influence on the formation of soil types and profiles by weathering, on the groundwater, and on the soil climate. To this must be added the biocenological interrelation of plants and animals in the various biotic communities occupying small units of space (biotope, ecotope) which according to their arrangement form the distribution pattern of the plant covering and of the landscape mosaic. An example of this is to be seen in the steppe belt of the Indus valley (fig. 41).

This article is intended to show how a good knowledge of the vegetation conditions in the Himalaya system can be obtained in a relatively short space of time: geographically by a large-scale survey of the climatic, geological and geomorphical conditions and plant-sociologically and biocenologically by detailed surveys of well-selected examples from the various climatic zones and altitudes of the Himalayan range.